This week's letter is "Q." So I went to my shelves, and this is what I pulled out. 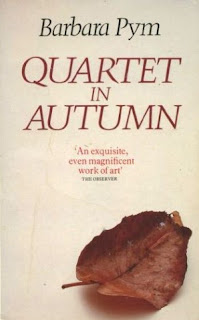 In 1977 England rediscovered one of her best living writers: Barbara Pym. Readers and critics alike acclaimed her new novel, Quartet in Autumn, as a major work by an important writer. Quartet in Autumn was the first new Barbara Pym novel to be published in sixteen years. After over a decade of being shunned by publishers as "out-of-date," Barbara Pym was once again a fashionable author.

Written at a time when the author had given up hope of ever being published again, Quartet in Autumn is the softly compelling story of human dignity in the midst of hopelessness. The novel presents us with Edwin, Norman, Letty, and Marcia, four elderly single people who work in the same office. Their work is their chief point of contact with each other and with society in general. The two women retire, an act that threatens the lives of all four.

Lovingly, poignantly, satirically - in the gentlest but sharpest way - Barbara Pym guides us through the lives of her four protagonists and shows us the facade they erect to defend themselves from the facelessness of the welfare state. Seemingly hopeless, their story is also optimistic, and even funny at times. Out of the tragic material of old age, Barbara Pym has made a beautifully constructed, almost musically perfect tale, told in revolving order from four points of view. It is the story of the subtle triumph of human dignity over the threats of solitude and death.

The book's page at Wikipedia here.

And a few more covers, including some foreign editions:

I'm a huge Barbara Pym fan (I just might have mentioned that once or twice before), and Quartet in Autumn is possibly my favorite of her novels (it's hard to choose just one). It was short-listed for the Booker Prize, and helped establish Pym's reputation as a major 20th Century writer. I first read it during the 1980s and fell in love with all the quirky characters. I've reread it several times over the years, and although the subject matter sounds depressing and dull, it never fails to lift my spirits. Today, I'm much nearer in age to the protagonists than I was when I first read the book, and I'm wondering what my reaction would be now. I guess it's probably time for another visit.