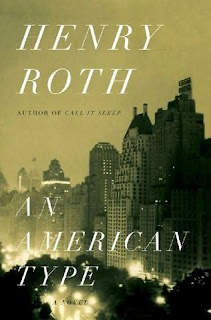 This review refers to an advance uncorrected proof of the novel.

Henry Roth was the author of the much-admired modern classic Call It Sleep, published in 1934. That largely autobiographical novel chronicles the experiences of a young boy growing up in the Jewish immigrant ghetto of New York's Lower East Side in the early twentieth century. The book was critically acclaimed and hailed as a modern masterpiece, but was never a huge seller, and Roth would not produce another novel until his four-volume Mercy of a Rude Stream appeared in the 1990s. And now comes Roth's final novel, An American Type. Published posthumously, it was put together by former New Yorker fiction editor Willing Davidson, who read through the nearly two thousand pages of writing left by the author at his death in 1995.

Set in 1938, An American Type centers around Roth’s alter ego, Ira Stigman, and is divided, roughly, into three sections. In the opening chapters Ira abandons his current domineering lover, Edith, when he falls in love with an aristocratic blond pianist (referred to only as “M”) at Yaddo, the artists’ retreat at Saratoga Springs, New York. The new romance exposes Ira’s conflicts between his working-class Jewish roots and his more “upwardly mobile” and artistic ambitions. For a while he abandons both his lovers and his own family to travel to California with an old friend, Bill Loem, seeking possible film-writing work. The second section of the novel is the story of their trip by car across the country to Los Angeles, and the adventures they have once they arrive in the film capital. But when work in the movie industry doesn’t develop, Ira returns to New York and his golden-haired muse; the story of their courtship and marriage makes up the last major section of the book. In addition, there’s a short first chapter and an epilogue which both take place many years after the main part of the book, and bring us up to date on Ira and M and the story of their marriage.

I suppose when a major author dies, there’s always the hope that we’ll find among his or her papers that undiscovered masterpiece to be published posthumously and enjoyed by all. So I can understand Willing Davidson’s enthusiasm and excitement when he was handed the task of reading through Henry Roth’s papers, to see if there was anything salvageable. And with the publication of An American Type, Davidson has done a fine job of demonstrating that there definitely was some wonderful writing there.

The problem with the book, it seems to me, is that it really never comes together as a novel – its many short (sometimes no more than a page or two) vignettes or incidents never provide the necessary weight and coherence a novel should deliver. It’s a shame the work couldn’t have been published as a collection of short pieces (or simply notes for a novel, as in the case of the recent volume of Nabokov’s notes for the unpublished Laura), rather than being forced into a form that doesn’t really suit it.

I had the same problem with the main character that other readers have mentioned – Ira never really gained my full sympathy or interest. It’s true that he has a distinct voice and outlook, and his adventures, sketchy and scattered though they may be, were at times compelling and maddening, and sometimes all too believable. But the constant focus on one character’s thoughts and feelings and behavior became irritating after a while. Davidson says in his editor’s afterword that Roth “couldn’t leave anything out – he found all personal detail equally engrossing.” And it shows. But the parts of the book I found most appealing were those brief moments when Roth turns his concentration away from Ira and gives other characters some space on stage – I would have welcomed a little more of that.

However, I ended up enjoying most of the book a great deal, and I’d certainly recommend it to other readers. Even with its failings, the novel is filled with some beautiful writing, and provides a fascinating glimpse of a very rough period in our national history.

Note: This review refers to an advance reading copy of the novel, provided free of charge by the publisher, through the Early Reviewer Program at Library Thing. The opinions expressed here are my own.
Posted by jlshall at 6:25 PM