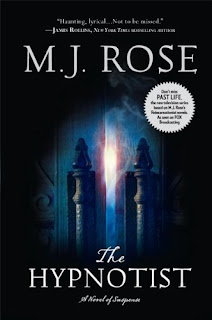 In M.J. Rose's fascinating novel, The Hypnotist, Lucian Glass, once a promising artist, and now a special agent with the FBI’s Art Crimes Team, is called upon to help investigate a series of incidents involving a mysterious collector who has been stealing and destroying priceless masterpieces. Glass's undercover work takes him to the Phoenix Foundation, an organization dedicated to the science of past life study. There, in order to maintain his cover, he agrees to be hypnotized in order to explore his past lives and how they’ve influenced his present existence. He’s been trained to withstand even this extreme form of questioning, but Glass is also being plagued by disturbing dreams that seem to be actual memories of lives he’s lived in the past. And when he wakes from these dreams, he feels a compulsion to draw portraits of women from those past lives – women he thinks he’s harmed in some way, but can’t remember how.

Under hypnosis, Glass travels further and further back in time, and uncovers several former existences. These journeys cause him to question his beliefs, his professional training, and even his sanity. And they eventually bring him right into the middle of one of the most bizarre art thefts in history, when the Metropolitan Museum is targeted by would-be terrorists intent on stealing a 1500-year-old, eight-foot-tall statue of Hypnos, the Greek god of sleep.

The book includes a couple of parallel plots, as well – both of them ultimately involved with the theft of the Hypnos statue. One is the story of Lucian and his lost love, Solange, another young artist who was murdered twenty years ago. When Lucian’s work requires him to visit Solange’s aging father, he’s introduced to a woman who may or may not be the reincarnation of his long-dead love. She seems to know things about him that only Solange could know, and he finds himself more and more drawn to her. And another story line has to do with the mysterious head of the Phoenix Foundation, Dr. Malachai Samuels, who is busy tracking down an ancient set of Memory Tools – “deep meditation aids” that help people access past-life memories. And Dr. Samuels will do anything to retrieve those Memory Tools.

The Hypnotist is the third novel in Rose's "Reincarnationist" series (the first two, The Reincarnationist, and The Memorist, also deal with aspects of the Phoenix Foundation), but it can very definitely be read as a stand-alone work. I haven't read either of the earlier novels, and I thoroughly enjoyed this one. Rose does a good job of introducing the reader to the overall reincarnationist back story, without letting it dominate or slow the action of the current work. And even though the book keeps multiple narratives afloat, and includes dozens of characters to keep track of, Rose manages to keep it all pretty straight-forward and easy to follow. All the characters are distinct, even the ones who only have a minute or two onstage; there's plenty of suspense, humor, and romance along the way; the plot continues to twist and surprise right up to the end. And I loved it that one of the characters was a librarian delving through unexplored files in the Phoenix Foundation's secret library – what a great job, even if your boss is possibly criminally insane!

The only real disappointment I experienced was at the very end – I don't want to give anything away, so I'll just say I found the ending just a bit too predictable. Not a bad ending, just a little more wrapped-up than I was expecting. Still, it's not enough to change my mind about the book. This is one terrific read!
Posted by jlshall at 6:18 PM