The Sunday Salon: Back to the Books in July

Wow, more than half of July has managed to sneak right by me. Doncha hate it when that happens? And here I was saying I wanted to try to slow down and savor (yes, I think I actually used that word) July a little more than I did June. (June was here and gone before I even turned around.) But so far, I don't seem to be doing much savoring. Well, I blame it partly on the cold I had during the first couple weeks of the month. Didn't really get much reading done. Mostly just slept and blew my nose. And watched the first season of "Man Men" via our cable company's On-Demand service. (Is it really possible Peggy didn't know she was pregnant? No, don't tell me what happens – I'm going to start season two this week.)

But the slow-down has really blown my reading schedule all to pieces. I was trying for a book a week this year, but here we are just about thirty weeks into 2009 (can that be right?) and I've only read twenty-seven books. So I'm obviously going to have to pick up the pace a bit. I'm doing a little better now, though. I finished Carlos Ruiz Zafon's The Angel's Game this past week (review, I hope, to come tomorrow), and I'm going to be finishing up Sarah Dunant's Sacred Hearts later tonight. So at least July won't be a total loss.

And I've got a couple more underway: Dance of Death, one of the Pendergast thrillers by Douglas Preston and Lincoln Child; and Grave Goods by Ariana Franklin. I suppose I should have started with Franklin's Mistress of the Art of Death, before tackling Grave Goods, but I found GG among the new releases at the library the other day and it reached out and grabbed me, so I just had to bring it home. 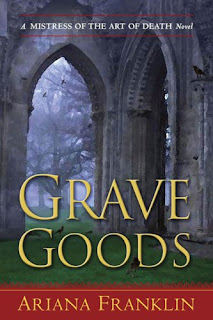 Today I've been doing a little assessment of the books I've read this year, but haven't reviewed yet. Didn't realize there were quite so many. Out of the twenty-seven books I've read in 2009, there are a dozen I still need to review:

So I need to get busy. And since I'm taking stock, I should admit that there are a few books I've started this year, but put on hold for now: Mortal Love by Elizabeth Hand, Stone's Fall by Iain Pears, and The Time Traveler's Wife by Audrey Niffenegger. I think I'll probably get back to Stone's Fall eventually, but the other two may just stay on the shelf, unread. Sad.

Anyway, that's where I stand at the moment. Now I need to go find out what becomes of Suora Zuana and the young Novice Serafina in that appalling convent in Sixteenth Century Ferrara. No, don't tell me what happens – I'm still hoping for a happy ending.
Posted by jlshall at 4:21 PM