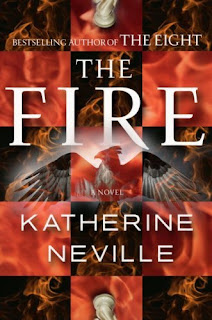 Written by Katherine Neville
Ballantine / Random House, 2008
This review refers to an advance reader's edition of the book.

In Katherine Neville's The Fire, a follow-up to her earlier best-selling novel The Eight, chess whiz Alexandra Solarin (called Xie) is drawn into a sinister mission to find a mysterious chess set which is said to be imbued with ancient and arcane powers. Alexandra, once a chess prodigy and now a young apprentice chef in a Washington DC restaurant, has been called home to Colorado to celebrate her mother's birthday. But when she arrives at the family lodge, she finds that her mother, Cat Velis, has vanished and left behind a string of clues to help Xie find both her missing mother and the long lost chess set. Aided by her friend Nokomis Key, her aunt Lily Rad (also a chess grandmaster), and her former childhood opponent Vartan Azov, Xie reluctantly sets out upon a confusing and dangerous quest that will eventually lead from Washington DC to the Russian wilderness, and involve a host of characters – many of them historical figures, including Albanian Sultan Ali Pasha, Lord Byron, Talleyrand, and Catherine the Great. Even Alexandre Dumas makes an appearance.

I received an advance copy of the book through Library Thing's Early Reviewer program, and read it without having first read Neville's earlier novel in which the history of the Game and its players is laid out. I realize now that was a mistake – I believe that accounts for a lot of the confusion I felt over and over as I was reading The Fire. It was an interesting story, albeit convoluted. But I'm not sure I ever really understood exactly what was going on. There were so many story lines – most of them confusing and hard to follow. The mixture of alchemy, chess wizardry, cooking, mathematical puzzles, and eternal life seemed very mish-mashy. The transitions between places and time periods were abrupt and wrenching, and seemed to be building to some ultimate climax that never fully materialized. White Queens and Black Queens kept turning up all over the place, and then disappearing. And why were all those Basques involved in the story?

Neville has obviously done a huge amount of research (there's no actual bibliography in the book, although the author's Acknowledgements section does contain a listing of some of her sources), but much of the book sounded as though she'd simply dumped her raw history notes into the dialogue, without even trying to work them into the story. Altogether, I think there was just too much telling and not enough showing in the book.

However, I think I could have put up with all of these problems if the main character had been more intriguing. But I'm afraid I found Alexandra just a bit – well, boring I guess. Or maybe just irritating. For one thing, she has to be told everything – she discovers almost nothing on her own. She has a hard time making even the most obvious connections between events. For someone who's supposed to be a world-class chess wizard, she has a curiously hard time coming up with anything resembling a strategy. She's constantly being blind-sided by everything and everyone – and is constantly remarking on the fact, herself. Eventually she starts to resemble those heroines in the old "cliff-hanger" movies – at the end of each of her sections of the narrative, there she is being tied to the railroad track or thrown off the side of a mountain – again! Well, not actually of course, but that's how it feels.

On the other hand, Alexandra's best friend and co-adventurer Nokomis Key seems unbelievably (indeed, almost preternaturally) able and mature for her years. She has personal resources and worldwide connections that James Bond might envy. And she single-handedly engineers key (her name – get it?) developments in the plot and outwits "players" many years her senior, who've been playing "The Game" far longer. She also has an irritating habit of using just about every cliche, catch-phrase and aphorism in the English language. I assume Neville meant it to be amusing, but after four hundred pages of the shtick, it just becomes annoying. At one point in the action, she even comes out with "Lawdy Miss Clawdy"! I kept waiting for "see ya later, alligator," but fortunately the gator never showed up.

And, finally, the ending itself was a bit of a let-down. Well, that's always a risk with stories about the search for supreme power, supernatural or otherwise. If the search goes wrong, the story can seem pointless. And if it's successful, just what do you do with the power once you've got it?

One of the reviews of the book suggested it should be marketed as a cure for insomnia. I certainly wouldn't go that far (or be that nasty), even though at times I did have to force myself to keep reading. But I really didn't mean this review to sound so negative, and I'm not sorry I read the book, because it made me very curious about the original novel, The Eight. In fact, I've already bought a copy of that one – it sounds much more exciting and I'm hoping it will clear up a lot of my questions and frustrations. As for the sequel, I'm not sure I'd recommend it to anyone unless they've read The Eight and just want to find out what happens to the characters later in life. But as a stand-alone work, I'm afraid there's just not much fire to be found in The Fire.
Posted by jlshall at 6:42 AM