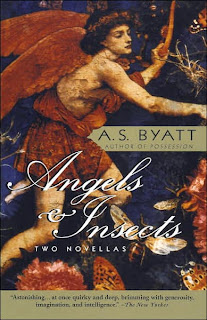 Angels & Insects, by A.S. Byatt, is made up of two novellas, both set in Victorian England. The first, "Morpho Eugenia," is the story of explorer and amateur entomologist William Adamson who has come to live in the home of his wealthy benefactor, the Reverend Harald Alabaster, after a shipwreck leaves him homeless and without other means of support. Sir Harald is also an enthusiastic naturalist, and has an extensive collection of specimens that he wants Adamson to help classify and catalog. There, in the Alabaster household, Adamson meets and falls in love with the Reverend's oldest daughter, Eugenia. Eventually, he asks the young woman to marry him and is thrilled, and more than a little surprised, when she accepts. At first ecstatically happy with his bride, Adamson soon begins to be puzzled by her frequent changes of mood and behavior. Eugenia's brutish brother frequently voices his disapproval of the marriage, believing Adamson to be an unworthy match for his sister. And more complications arise when Adamson begins to form a close friendship with another young woman in the household – a sort of governess or tutor who shares his interest in insects and the natural world. Eventually, the story's Gothic plot turns very dark indeed, as Adamson's discoveries make him reconsider his seemingly perfect existence.

The second novella, "The Conjugial Angel," is (quoting from Library Journal's description) "a philosophical ghost story, bizarre and comic." It's the story of Lilias Papagay who believes her sailor husband has died while on a sea voyage. She gets herself involved with a group of mediums who meet to conjure up spirits for their clients and patrons. One of those patrons is Emily Tennyson Jesse, sister of the poet Alfred Tennyson. As a young woman, Emily was engaged to Tennyson's great friend Arthur Henry Hallam, who died suddenly in 1833 while traveling to Vienna. Tennyson dedicated his famous poem "In Memoriam" to Hallam, and that poem plays a role in Byatt's novella. It's a little difficult to write much about the story without giving too much away, so I'll stop there.

Of the two stories, I think the second one was my favorite, even though I suspect it requires a fairly extensive knowledge of Tennyson's poetry to be fully appreciated – and that's something I don't really possess. But I liked the humor – something you don't usually expect from Byatt's work. Also, having seen the film "Angels & Insects" before I read the book, I was familiar with the plot of "Morpho Eugenia" – the film was based on that first novella. Although, even if I hadn't seen the film first, I think I'd have seen the surprises coming – they're not particularly subtle. And I found all the talk about ants and insects and Darwin and nature just a tad boring after a while. OK, maybe more than just a tad.

Would I recommend it? Well, I always have problems with Byatt – I think she's an acquired taste. Her work tends to be fairly scholarly and can be very rewarding if you don't mind doing a certain amount of intellectual work. I generally like that. But if you're just looking for a quick, entertaining read, I'm not sure this is the book to choose.
Posted by jlshall at 6:39 PM