Found several new titles this week (well, new to me anyway), but only two of them look like they might actually make it to my TBR list. Don't know if that's a good or a bad thing – I love adding new books to my list; but it's already so ridiculously long that I'd need more than one lifetime to make a dent in it. Or some time all by myself on that well-known desert island with only a fully-stocked library for company.

I discovered Richard Russo's new book, That Old Cape Magic, while I was browsing my "Local" section at Library Thing. Russo is going to be reading from and discussing the book on August 12th, at Politics and Prose, the Washington DC bookstore/coffeehouse on Connecticut Avenue. Don't know if I'll make it to the event, but I'll definitely be taking a closer look at his book.

And I first heard about Her Fearful Symmetry over at Deslily's Here There and Everywhere blog. The new one by Audrey Niffenegger, it's due to be released in September. I was never able to finish The Time Traveler's Wife, but this one sounds spooky and interesting enough to give it a try. It's being issued with different covers – apparently, one in the U.S. and a different one in the U.K – so I'm including pictures of both. The first one with all the vines or branches or whatever, is the Scribner cover that will be available in the U.S. The other cover is from the UK edition by Jonathan Cape. 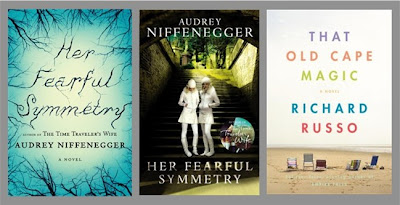 So which do you prefer? I think I like the Russo cover better than either of them. But doesn't the U.S. edition of "Symmetry" remind you of the cover on Tana French's In the Woods? 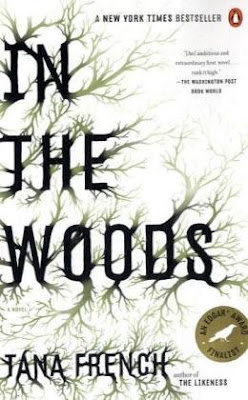 And why all these copy-cat covers? And why do books have to have different covers in different countries anyway? Ah, the mysteries of the universe – I could sit here pondering all day. But I really need to get back to my reading!

Friday Finds is a weekly event hosted by mizb17 at Should Be Reading. Participants are asked to share with other bloggers about the new-to-you books found during the week - books you either want to add to your TBR list, or that you just heard about that sound interesting.
Posted by jlshall at 9:39 AM