Review: The Valley of Fear 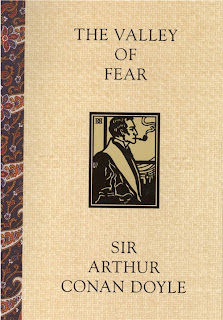 The Valley of Fear was the last Sherlock Holmes novel written by Sir Arthur Conan Doyle. First published in installments as a magazine serial in 1914, it was brought out in a single volume in 1915. The action takes place before the period of "The Final Problem," the story in which Holmes and his archenemy Professor Moriarty apparently plunge to their deaths at Reichenbach Falls.

At the beginning of the tale, Holmes receives a coded letter informing him that something sinister is about to happen at a country estate called Birlstone. Shortly afterwards, and before Holmes can act on the warning, he receives further word that Birlstone's owner, the American Jack Douglas, has been found dead in his study at the manor house, his face destroyed by a shotgun blast. Douglas's body was discovered by his old friend, Cecil Barker, who was a frequent visitor at the estate.

As Holmes and the local authorities pursue their investigations, the plot thickens (doesn't it always?). Certain clues point to the fact that the killer might also have been an American. Then there's the problem of the drawbridge – the estate is equipped with a large moat and a working drawbridge which was raised (that is, closed) every night. The moat is too extensive to cross easily, and with the drawbridge up and no strangers in the house, the murder begins to look like "an inside job." Add to that the odd behavior of the dead man's widow, a strange tattoo on his body, the discovery of a hidden bicycle which might have been used by the murderer, and a single dumbbell that seems to fascinate Holmes – and the mystery becomes more and more puzzling. Of course, Holmes eventually presents his solution of the crime – but only after uncovering the story of Douglas's past life in America.

I've read most of Conan Doyle's Sherlock Holmes stories and novels – well, a lot of them anyway. But I had managed to neglect this one until now. I believe by the time Conan Doyle brought this one out, he'd really grown pretty bored with Holmes; he'd already tried to kill him off at least once. And I think that boredom shows here – much of the story revolves around several recycled plot elements from other Holmes stories, and only half of the book is concerned with Holmes and his investigation of the murder. The other half is taken up with a lengthy flashback to the apparent victim's earlier life in America. Interesting enough, but not what I signed on for. The book definitely loses momentum when Holmes disappears from the action. If you've read all the other Holmes stories and novels, by all means finish up with this late appearance of the master detective. But if you're just making his acquaintance, I'd definitely recommend starting with one of the earlier works.
Posted by jlshall at 4:51 PM