This week's letter is "O." So I went to my shelves, and this is what I pulled out. 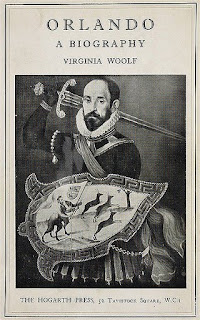 The cover of the first edition.
Description from Good Reads:

In 1928, way before everyone else was talking about gender-bending . . . Virginia Woolf wrote her comic masterpiece, a fantastic, fanciful love letter disguised as a biography, to Vita Sackville-West. Orlando enters the book as an Elizabethan nobleman and leaves the book three centuries and one change of gender later as a liberated woman of the 1920s. Along the way this most rambunctious of Woolf's characters engages in sword fights, trades barbs with 18th century wits, has a baby, and drives a car. This is a deliriously written, breathless-making book and a classic.

See the book's page at Wikipedia.

The cover of my old Signet Classics edition (complete with coffee-cup stain): 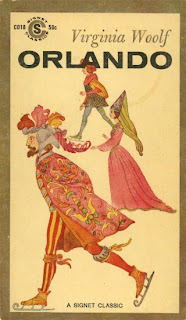 The cover of a recent audio version of the book: 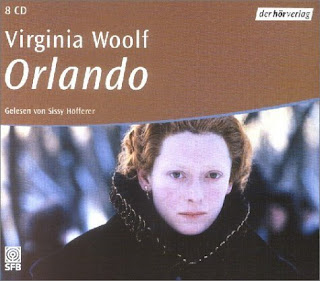 And a selection of various covers the book has sported over the years:

Orlando has been one of my favorite books since I first read it over forty years ago (I was such a precocious youngster!). Set in England and Constantinople, and spanning almost four centuries of wild and crazy adventures, it's a unique and fascinating literary experience.
Posted by jlshall at 5:45 AM