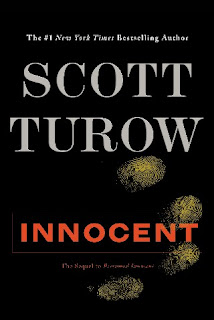 Twenty years after being tried for the murder of his colleague and lover, Carolyn Polhemus, attorney Rusty Sabich is back – still looking for love in the wrong places, and making all the wrong moves. And Scott Turow is in fine form once again, delivering another sure-fire page turner. If, like me, you loved Turow’s bestselling Presumed Innocent back in the 1980s, then I think you’re in for a treat: twenty years later, here comes the sequel – Innocent, published this month and already climbing the charts. Well, actually, there have been several “sequels” to Presumed Innocent, over the years – each one following a different character from the fictional Kindle County legal world Turow introduced in that first novel. But in Innocent, we get to find out what happened to the major players from that earlier book, and follow them into new adventures.

Innocent works just fine as a stand-alone novel, although I imagine it helps to know a bit about the earlier story. The bare bones plot was this: Rusty Sabich was accused of the rape and murder of a female attorney he worked with – Carolyn Polhemus. He was tried for the crime and acquitted, but the experience was almost fatally traumatic for him and his wife and young son. Tommy Molto, the prosecutor in that earlier case, was also badly scarred by the trial and its aftermath: accused of unethical conduct and mishandling evidence, he eventually lost his job. And although Rusty helped him get it back, there’s still animosity there – and Tommy still believes, deep down, that Rusty got away with murder.

Flash forward twenty-odd years, and Tommy is now the acting chief prosecutor in Kindle County. Rusty, now a chief judge of the appellate court, is getting ready to run for a spot on the state supreme court. And just weeks before the election, Rusty wakes up one morning to find his wife Barbara lying in bed beside him, dead. Not only has she died under mysterious circumstances, but when it’s learned that Rusty waited twenty-four hours before notifying anyone of her death, that he “tidied up” the bedroom while he was waiting and “thinking,” and that he’d recently been having another affair with another female colleague, Tommy and his staff immediately assume it’s happening all over again – Rusty Sabich has once again gotten away with murder. In fact, this time, no one can even be completely sure that there was any “foul play” involved.

Eventually, of course, Tommy overcomes those doubts and hauls Rusty into court to stand trial for yet another murder. I won’t say much more about the plot, except that there are a lot of surprises to come, especially after the trial gets going – trials, after all, being what Turow does best.

When I first heard about Innocent, I was a little wary – I had enjoyed Presumed Innocent so much, I was prepared for a let-down with this one. But I was very pleasantly surprised – I really enjoyed this book, too. Well, maybe not quite as much as the earlier novel. That one really hit me hard, but this one has a lot going for it, too. Rusty is still an appealing, though frustrating character, and his opponent, prosecutor Tommy Molto seems a little more human and well-rounded here. It’s interesting to see what’s happened to several of the characters from the earlier book as they make their appearances in this new one – especially Rusty’s son Nat, who’s now twenty-eight and beginning a legal career of his own. Once again, it’s the women characters who seem to cause all the grief. And once again, the actual mystery of the book isn’t all that hard to figure out, and the conclusion becomes fairly obvious (even inevitable) pretty early on. But none of that diminishes any of the fun. Innocent is a really terrific read.

[Note: My copy of Innocent was provided, free of charge, by the publisher, through Library Thing's Early Reviewer program. I received no other compensation. No one attempted to influence my review, and the opinions stated here are my own.]
Posted by jlshall at 11:52 AM