This week's letter is "M." So I went to my shelves, and this is what I pulled out.

Orphaned at an early age, Philip Ashley is raised by his benevolent older cousin, Ambrose. Resolutely single, Ambrose delights in Philip as his heir, a man who will love his grand home as much as Ambrose loves it himself. But the cozy world the two construct is shattered when Ambrose sets off on a trip to Florence. There he falls in love and marries - and there he dies suddenly. In almost no time at all, the new widow - Philip's cousin Rachel - turns up in England. Despite himself, Philip is drawn to this beautiful, sophisticated, mysterious woman like a moth to the flame. And yet ... might she have had a hand in Ambrose's death?

The cover of a recent paperback edition:

A photo of the author as a very young woman: 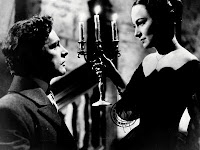 I first read this one at about age fourteen – found a copy stored in my grandparents’ garage and promptly confiscated it as my own. I had recently seen the old movie on TV, starring Olivia de Havilland and Richard Burton. And as I had an enormous crush on the gorgeous Welshman at the time, the book instantly became one of my favorites. And while my passion for Richard has modified somewhat over the years, I still think the book is a great read. (Good movie, too.)
Posted by jlshall at 5:40 AM