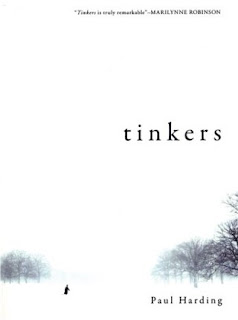 I've always kept a pretty close eye on the book publishing world (even before I became one of those pesky book bloggers). I usually know something about what's being published, what's popular, what's not, what's being talked about – even if it's work I'm not likely to read. And when a book I've never heard of, written by an author I've never heard of, wins the Pulitzer – well, it certainly piques my interest. So I got a copy of this year's winner of the award for best novel, Paul Harding's Tinkers, and spent all yesterday evening reading it.

Tinkers tells the story of eighty-year-old George Washington Crosby, who is (quite literally) on his deathbed, with his family gathered around him. During the course of the book, we experience his last eight days of life (sometimes in rather gruesome detail), getting glimpses of his thoughts and memories and hallucinations. There are frequent referrals to the amount of time he has left to live ("Ninety-six hours before he died, George said he wanted a shave.") There are also passages of the book that seem to slip outside of George's head, telling us the story of Howard Crosby, George's father. Howard drove a wagon for a living, selling odds and ends of housewares to people who lived in a backwoods area (I had a little trouble pinning down the locations and time frames of the book). He also had epilepsy and abandoned his family when he realized his wife was planning to have him committed to a home for the insane. Howard started over in the city, with a new name, a new wife, and only years later made contact a single time with George, his oldest son.

In addition to the rather impressionistic story of George's life, there's a lot of discussion of clocks and clock-making and clock-repair – most of it probably only of interest to clock-makers, I think. Yes, I got the metaphor about clocks being a symbol for the ticking away of a life; but that didn't make it any less tedious. There are many lists, and many rambling sentences (one or two seem to go on for more than a page). The story is, with only a couple of brief exceptions, relentlessly depressing. If it hadn't been so mercifully short, I don't think I'd have stuck with it to the end.

I will admit, as many people have pointed out, that Tinkers is a remarkable piece of craftsmanship, especially for a first novel. And it has some really beautiful writing in places. One of my favorite passages comes about midway through, in a description of George's childhood home:

The porch was unpainted and its wood bleached to a silvery white. When the sky filled with clouds, it often turned the same silver color as the wood, so that it only seemed missing a grain to be wood and the wood only missing a breath of wind to stir it and turn it into sky. [p.75]

And there are even a few almost light-hearted touches here and there, all very nicely done. For instance, here's George's family gathered for a Christmas dinner:

The children were astonished by the ham that Kathleen had cooked for the Christmas meal. It was the largest they had ever seen. It was covered in a crust of brown sugar and molasses. Buddy the Dog sat at attention, as if recommending himself to the ham over the children by his proper manners. Kathleen shooed him with a kick in the ribs, but he just let out a yelp and stayed put. Russell the Cat came into the room, too, and sat facing the wall, away from the table, cleaning his paws, as if an affectation of utter disinterest might be the trick to getting a scrap. [p.83]

Unfortunately, the lighter bits are few and far between; and mostly diluted by additions like that kick in the ribs. It's a very dark read.

A few reviewers have said the book should be read as poetry rather than prose. Fair or not, when I hear that, I always tend to assume they mean it just doesn't work as a novel. And in this case, I think my assumption is right.
Posted by jlshall at 9:42 PM