This week's letter is "H." So I went to my shelves, and this is what I pulled out. 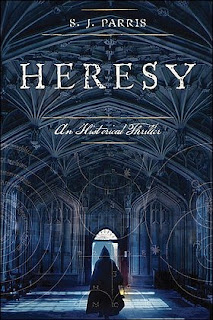 Description from the book's page at Amazon.com:

Set in 1583 against a backdrop of religious-political intrigue and barbaric judicial reprisals, Parris's compelling debut centers on real-life Giordano Bruno, a former Italian monk excommunicated by the Roman Catholic church and hunted across Europe by the Inquisition for his belief in a heliocentric infinite universe. Befriended by the charismatic English courtier and soldier Sir Philip Sidney, the ambitious Bruno flees to more tolerant Protestant England, where Elizabeth I's secretary of state, Sir Francis Walsingham, recruits him to spy, under the cover of philosophical disputation, on secretly Catholic Oxford scholars suspected of plotting treason. As one Oxford fellow after another falls to gruesome homicide, Bruno struggles to unravel Oxford's tangled loyalties. Parris (the pseudonym of British journalist Stephanie Merritt) interweaves historical fact with psychological insight as Bruno, a humanist dangerously ahead of his time, begins his quest to light the fire of enlightenment in Europe.

I just finished reading an ARC of this one, although I believe it was released in the US in February. Hope to get my review up later today, or tomorrow.
Posted by jlshall at 8:12 AM