Review: The Brontes Went to Woolworths 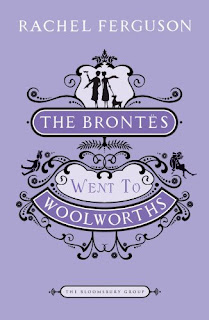 (My copy of this book was provided by the publisher, through Library Thing's Early Reviewers program.)

After reading Rachel Ferguson's The Brontes Went to Woolworths, the first thing that springs to mind is this: A little whimsy goes a long, long way.

Ferguson's novel is quite simply one of the strangest books I've ever read. One of those books you finish and then head back to the beginning to check out all those things you think you must have missed the first time through. And while I didn't actually dislike the book, finishing it was a struggle at times.

The story is, in part, narrated by Deirdre Carne, one of three sisters living with their widowed mother in 1930s London. Deirdre is a journalist working on her first novel, Katrine is an aspiring actress, and the youngest, Sheil, is still at home being looked after by her governess Miss Agatha Martin (my favorite character). The girls, led by Deirdre and Mrs. Carne, have invented an intricate fantasy life to amuse themselves, which includes many imaginary friends – some of them based on real-life characters. The Carnes will go to great lengths in their attempts to "learn about people we love" (otherwise known as stalking):

We get their papers, and follow their careers, and pick up gossip, and memorise anecdotes, and study paragraphs, and follow their moves about the country, and, as usually happens if you really mean business, often get into personal touch with their friends or business associates, all with some fresh item or atom of knowledge to add to the heap. [p. 3]

One of these fantasy objects of desire is high-court Judge Herbert Toddington – the Carne women refer to him affectionately as "Toddy" and create a lavish make-believe story around him. Then one day Deirdre is introduced to Toddy's living and breathing real wife at a charity bazaar, and this new relationship leads to complications and family upheavals, as the real world and the imaginary one collide.

Those other sisters, the Bronte girls, do figure in the story as well, albeit (and necessarily) in a very shadowy fashion. I did enjoy that part of the book, and wished they could have stayed around a little longer. Similarly, I would have applauded a little more time spent with Miss Martin, the governess; she provided a bit of welcome relief from all that frenzied whimsy and fabrication.

I believe the reader's enjoyment of the book is probably completely tied up with whether or not you succumb to the (supposed) charm of the narrator and her seemingly deranged family. I guess I wasn't charmed, or at least not enough. Just like many other readers, I spent the first half of the book trying to decide what was real and what wasn't, before I finally realized that question wasn't getting me anywhere. Once I got that reality/fantasy problem out of the way, I actually had some fun with the second half of the book.

And even though I never really warmed to the story or its major characters enough to say I'd recommend it, I was impressed with Ferguson's ability to create a unique world of her own and people it with characters who feel and sound like they belong there, even though they might also be annoyingly silly. According to the information on the back of the book, The Brontes Went to Woolworths was her second novel, after which she wrote nine more before she died in 1957. I think those other novels are worth seeking out, if only to see if I find them as irritating as this one.
Posted by jlshall at 9:13 AM