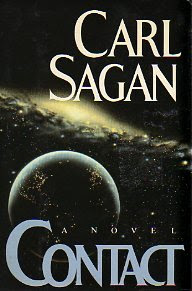 A worldwide system of radio telescopes, in the charge of brilliant astrophysicist Ellie Arroway, picks up a "Message" from outer space. Ellie is instrumental in decoding the message and building the "Machine" for which it gives instructions (despite stiff opposition from religious fundamentalists and those scientists and politicians who fear it may be a Trojan Horse). Then she and fellow members of a small multinational team board the machine, take a startling trip into outer space and on their return must convince the scientific community that they are not the perpetrators of a hoax. Sagan's . . . informed and dramatically enacted speculations into the mysteries of the universe, taken to the point where science and religion touch, make his story an exciting intellectual adventure and science fiction of a high order.

********************
Before reading Carl Sagan's 1985 science fiction novel, Contact, I had read some of his nonfiction, and always enjoyed his many TV appearances. I suppose the old accusation about his being a "popularizer" is true, but I don't think there's really anything wrong with trying to bring an appreciation of science to the masses. But I have to admit it was the 1997 film of this novel that caught my interest and nudged me into reading the book. And that was a good thing, because it's a great read and I really enjoyed it, even though in many ways the film and book were very different – the film was probably more exciting, but the book naturally gives you a lot more to think about. Sagan wasn't brilliant at painting characters – aside from Ellie, most of the characters in the novel are a lot like interchangeable parts. But, after all, it's the story and the ideas behind that story that are the main reasons for reading the book.

A few things occurred to me as I was reading. One of them is that Sagan must have spent almost his entire life in meetings! He portrays the meeting, the conference, and the collaborative endeavor better than just about any writer I've ever come across. And he had some interesting ideas about religion – some of which is there in his nonfiction, of course. But it's much more entertaining here – there are some great exchanges between the scientists and the preachers. I loved this passage:

"If God is omnipotent and omniscient, why didn't he start the universe out in the first place so it would come out the way he wants? Why's he constantly repairing and complaining? No, there's one thing the Bible makes clear: The biblical God is a sloppy manufacturer. He's not good at design, he's not good at execution. He'd be out of business, if there was any competition."

I did find reading a sci-fi book from the '80s to be just a bit disorienting. Sagan's wonderfully inventive imagination didn't extend to cell phones or email or the Internet, and consequently much of his future world seems already outdated and a bit slow-moving. But that doesn't really take away from the overall enjoyment. This is one I'd definitely recommend.
Posted by jlshall at 5:30 AM