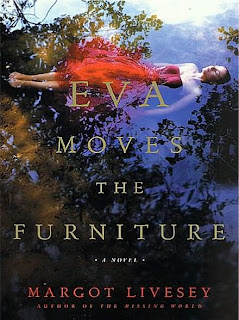 The title character of Margot Livesey's Eva Moves the Furniture is born under a bad sign. On the morning of her birth, six magpies are spied in an apple tree outside the family cottage in Troon, Scotland. And if that's not discouraging enough, Eva's mother dies that very night, leaving the motherless child to be raised by her aunt and father.

But this isn't Charlotte Brontë or Lemony Snicket – both of the adults dote on the little girl and her childhood isn't, by any means, a series of unfortunate events. In fact, though it takes place between the influenza epidemic that caused the death of her mother, and the upheavals of World War II, Eva's story would be a fairly mundane tale of a young Scottish lass growing up and finding her place in the world – if not, of course, for the "companions."

These two presences, a woman and a young girl, first appear to Eva one day when she's playing with her doll in the garden – although there are hints they may have been with her from an even younger age. Invisible to everyone except Eva, the companions present themselves at unpredictable intervals over the course of her entire life. At first, Eva assumes they've come to protect her – and when they first appear they do seem benevolent. But after a while, that doesn't look so clear-cut. They can be mischievous and malicious as well as kind. And they seem to have an agenda of their own in their plans for Eva's future. They help her avoid disaster on at least one occasion, but they also put her in embarrassing and sometimes dangerous situations.

As World War II begins, a grown-up Eva moves to Glasgow to study nursing and tend injured soldiers. Her life is changed completely by the experience and she falls in love with a handsome plastic surgeon, who wants to marry her. But the companions have followed her in the move away from her childhood home, and Eva must decide whether or not to tell her husband-to-be about their life-long presence. That decision will affect her future and will eventually lead her to guess the identity of her two ghostly attendants.

Eva is an interesting character, and easy to sympathize with, but I found some of her behavior and decisions a little hard to understand or accept. She has a bit of unreality about her that can be unsettling as well as charming – much like the novel itself. This is an odd little book: It has so much of the fairy tale about it, even though it seems very naturalistic as well. I enjoyed it very much. Early on, Eva reveals that the classic Andersen tale "A Little Mermaid" is one of her favorite stories, and was one of her mother's favorites, too. And a lot of Eva's story has the feel of that fairy tale about it – as if she herself, in addition to her companions, might be a visitor to this everyday world, from some distant otherworldly realm.
Posted by jlshall at 4:45 PM