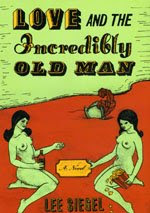 Lee Siegel’s Love and the Incredibly Old Man is a novel about a professor and novelist named Lee Siegel who agrees to ghost write the memoirs of a man claiming to be Juan Ponce de León, the Spanish conquistador who explored Florida and, legend has it, went in search of the Fountain of Youth. According to Mr. de León’s story, he actually found the life-sustaining fountain and is now over five hundred years old. But the fountain, alas, has run dry; and now the ancient explorer is facing his fast-approaching end of days. He wants his story told, and he thinks Mr. Siegel is just the man to do it. And after he offers the writer a massive amount of money for the job, Mr. Siegel thinks Mr. Siegel is just the man to do it, too.

Mr. de León has had five wives over the centuries and loved countless other women (in fact, at times it seems he’s made love to just about every woman he ever met, including the Queen of Spain). He’s been an actor and masqueraded as a priest. He’s taken on many different identities over the centuries, to avoid having his secret found out. And he claims to have discovered cigars, rum, and popcorn.

The story unfolds mainly through daily interviews between Siegel and de León, alternating with the writer’s night-time attempts to pull together some kind of a manuscript that will pass muster with his employer. Juan Ponce has definite ideas about what he wants the book to be. It’s to be about love in all its forms (“Love and time, love and age, love and death. Love true and false, glorious and foolish, tragic and comic.”) and it must tell his unbelievable story in a way that will make people believe it.

Well, by the end of Love and the Incredibly Old Man, I think Mr. Siegel and Mr. Siegel have both done their jobs pretty well. It’s a tall tale, but one you’d really like to believe.

To be honest, I never would have chosen this book on my own. I received it through LibraryThing’s Early Reviewer program, and (even though it was one of the titles I requested) at first glance I really thought maybe the famous LT algorithm had experienced a major glitch this time. But I guess they knew what they were doing after all, because in the end I found myself really enjoying the book. Sometimes it’s good to step outside your comfort zone and treat yourself to something new and unfamiliar.