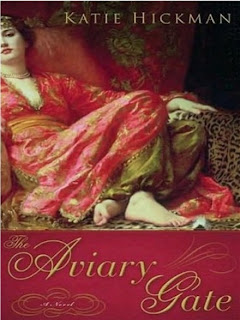 "We come here as slaves, all of us: slaves of the Sultan. We give up everything, even our names. It is a strange fact – don't you think? – that not one of us was born Ottoman, or even a Muslim. Not one of us. There is nothing to unite us except the fact that we have the honour to be the Sultan's women. And do not forget this, . . . : there is no higher honour." [p. 55]

I so very much did not want to like this book. Yes, I did request an advance reading copy from Bloomsbury. But I was guilty of doing something I hardly ever do – asking for a book I knew absolutely nothing about. I almost always do quite a lot of research on an author or any given book before I buy it or request a reading copy. Not this time, though. And from the reclining odalisque with the come-hither stare on the cover, to the jacket flap description of "a rare glimpse into the forbidden confines of the Sultan's harem," the whole package just screamed "bodice-ripper" and "not my kind of story."

But guess what. You know that old adage about not judging a book by its cover? Well, it's been proven true once again. Even though, the whole time I was reading The Aviary Gate, I kept telling myself I should not enjoy it – I did.

Can a Barbara Cartland marathon be far behind?

No, seriously, although it certainly has elements of the romance novel, The Aviary Gate is nothing like a Harlequin. It's a thoroughly engrossing historical tale of murder and intrigue in the Sultan's harem in 16th Century Constantinople, juxtaposed with the story of a present-day academic whose research brings the episode to light.

Based partly on fact, Hickman's novel shifts back and forth between the story of Celia Lamprey, a sea captain's daughter lost in a late-16th Century shipwreck and sold into slavery at the Sultan's court, and that of Elizabeth Staveley, the Oxford researcher who becomes obsessed with finding out what actually happened to the young woman. Did she escape the Sultan's harem and return to England? Was she rescued by diplomat Paul Pindar, the man she was engaged to at the time of the shipwreck? Did she live out her life as a Sultan's concubine? Or was she somehow involved in the poisoning of the Sultan's chief black eunuch and possibly imprisoned or even executed?

Well, I'm not going to give away the ending – I'll just say it wasn't really what I expected. But then the entire book was a pleasant surprise. And some of it was just, well, surprising. Like the descriptions of a 16th Century version of a bikini-wax session, and the mechanics of producing eunuchs to guard the Sultan's harem (actually, I could have done without that last episode altogether).

The book does have its flaws. Some of the dialogue sounds a little too modern to be thoroughly believable Elizabethan speech: One of the characters agrees with another by remarking "I'll say!" and another expresses his doubt about the success of a plan by arguing that "we'll be dead meat." And the current-day story frequently seems rather lackluster in comparison with the thrills and escapades of the Sultan's palace. Perhaps the fact that Hickman's earlier work was mostly nonfiction might have something to do with that.

One of the interesting things the novel points out is just how much power women could attain in the ancient harem system. There were, of course, the "powers behind the throne" – the Sultan's mother, and chief wives and concubines. But for the other most-favored slaves, there was also the possibility of a marriage outside the court, to a rich and powerful nobleman or merchant. These women were highly sought after because of their ties to the royal circle.

The Aviary Gate is a fascinating combination of academic mystery, historical adventure, and thrilling love story. I can heartily recommend it as a romance novel for people who hate romance novels.
Posted by jlshall at 2:52 PM