Whether you usually read off of your own book pile or from the library shelves NOW, chances are you started off with trips to the library. (There’s no way my parents could otherwise have kept up with my book habit when I was 10.) So . . . What is your earliest memory of a library? Who took you? Do you have you any funny/odd memories of the library?

Well, I suppose my earliest memory of a library (that is, a public library) would have to be the San Pedro Park branch of the San Antonio TX public library system. And I’m not sure how old I was when I was first taken there – but probably sometime while I was in the second or third grade. Earlier than that, I had to rely on my own little collection of picture books and the ancient children’s books that were passed down to me by my older cousins. It’s strange – I don’t really think of my family as being particularly bookish. But we always had books around. I was read to from infancy, and some of my favorite possessions, from the cradle on, were books.

The San Pedro Park Branch Library is housed in a very pretty little Spanish-style building constructed in 1930, and located in the middle of the oldest municipal park in Texas (and, so the story goes, the second oldest municipal park in the US, after Boston Commons). It consists of two separate wings built around a central atrium or hallway – one wing for adult literature, and one for children’s books. As a child, I spent countless Saturday mornings and afternoons, happily browsing its collections. I can still remember exactly where certain titles were located on the shelves. And although I’m sure I must have visited during the school year, in my memory it’s always summer when I’m at the library.

I usually went to the library with my cousin MLB, and we were always accompanied by our mothers – the library was too far to walk to, by San Antonio standards, so we had to be driven. And after a brief visit inside, our moms would retire to a shady spot outside the library and wait while my cousin and I got lost among the books. At some point, having wasted an entire morning or afternoon waiting for us to choose our books, either my mother or my aunt would storm into the library to hurry us up. Of course, the nice thing about being in a library was that we could shush our mothers with impunity and linger just a little longer.

After I got to be a teenager, I started going to other libraries, primarily the main library downtown. And then another, newer branch library (the Westfall Branch) closer to the part of town my future husband liked to hang out in. We would frequently go there on Friday-night study dates. In fact, we were so habitual in our routine that his buddies would sometimes stop by the library in search of him. No doubt with some dastardly hi-jinks in mind. But I digress, as usual.

The old main library in downtown San Antonio was all boarded up the last time I visited. I’m sure the downtown developers have something in mind for it – it’s a great old 1930s classic-revival style building and backs up onto the San Antonio River Walk which has experienced a fantastic facelift in recent years. And the Westfall branch has undergone renovation and expansion several times since the 1970s, and no longer resembles the small mid-century modern style library I knew. But the San Pedro Park library is still there, looking amazingly like it did when I was a child. I always loved it, and it’s still one of my favorite libraries, even though I haven’t actually walked through its doors in over twenty years. On a recent visit, my cousin took some photos of the library and I’m including one below – I hope she doesn’t sue me for copyright infringement. 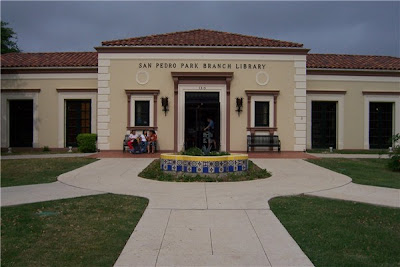 OK, while we're on the subject of libraries and our memories of them - there's this book that I've been trying for ages to track down and just cannot remember the title or author. Talking about the San Antonio library reminded me because that's where I first found the book. It was a children's book (well, for "young people," anyway) and would have been published probably in the 1950s or l960s. It was about three girls who were friends (or possibly sisters) and a ring they lost one summer and then found again a year or so later when they discovered it had fallen into the cracks in the floor of a porch or gazebo or something. Sound familiar? If you have any idea what book it might be, please please please let me know. It's been driving me crazy for years now.
Posted by jlshall at 8:59 AM