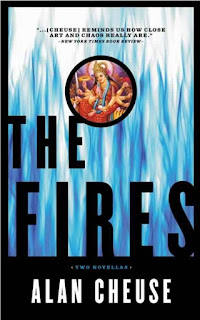 The pair of short novellas that together make up Alan Cheuse’s The Fires are excellently crafted and emotionally compelling works exploring themes of memory, love, loss, and renewal. As I read them I was often reminded of J.D. Salinger – almost as if we’d dropped back in on Franny and Zooey, now in their middle years with adult problems (and problem children) of their own. I’m not sure whether or not Cheuse would like to hear that, but for me it’s a great compliment.

In the first work (also titled “The Fires”), Gina Morgan, middle aged and menopausal, must travel to Uzbekistan to deal with the complications of retrieving her dead husband’s body after he’s killed in an auto accident. If that’s not bad enough, she also has the problem of carrying out his last wish – to be cremated – in a Muslim country where cremation isn’t practiced. In “The Exorcism,” Tom Swanson must deal with the aftermath of his daughter’s expulsion from college for setting fire to a grand piano in the college concert hall. Thus, the two instances of fire, another uniting element.

There was really only one part of the two novellas that I felt was something of a let down, and that was Cheuse’s use of the sudden, unexpected return of menstrual flow as a convenient metaphor for renewal and rebirth. (Didn’t Erica Jong use this, too? Maybe I’m not remembering exactly – it’s been a lot of years since I read about Isadora Wing and her high-flying zipless sexual escapades.) Anyway, it bothered me, and it was the only part of the story that seemed a bit forced. And I also kept worrying about when the poor woman was going to find a pharmacy in the midst of all her other problems.

I enjoyed The Fires so much I immediately sat down and read it over a second time – something I rarely do, even with short works. And I think it will stand up to many re-readings. These are very fine stories by a gifted and insightful writer.
Posted by jlshall at 5:14 PM