The Happy Hollisters, by Jerry West 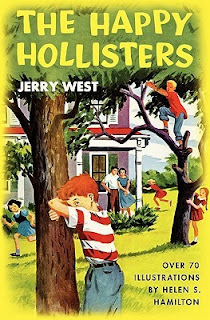 The Happy Hollisters by Jerry West, is the first book in a series that was popular with children in the 1950s and early 1960s.  I read several of the books when I was a kid, but never read this first one until this year when I read it for the Pre-1960 Classic Children's Books Reading Challenge.

It's a very cute story about the five Hollister children who move to a new house in a new town, when their father gets a job there.  Their adventures begin on the very first day of their move, when the moving van containing all their toys disappears.  It was also carrying their father's important new invention, so naturally the young Hollisters immediately set about trying to solve the mystery of the disappearing moving van.

At the same time, they begin exploring their new home - the house is said to be haunted and is also supposed to contain a hidden treasure.  And while they investigate the place, they find a secret stairway that brings even more excitement.  A mysterious intruder leads them to a hideout on a deserted island where all the puzzles are eventually solved.  The five Happy Hollisters recover their missing possessions, find the hidden treasure, and decide that they're ready for more adventures in the future.  Like I said, very cute story.

I loved these books when I was a kid, and I had a lot of fun traveling down memory lane with this one.  The story was appealing, and the illustrations by Helen Hamilton are really charming.  I'm not sure how the books would go over with today's young readers - the action is definitely tame compared to the books around right now.  But I think they still might be good for children just starting to read on their own, before they move on to more sophisticated stuff.