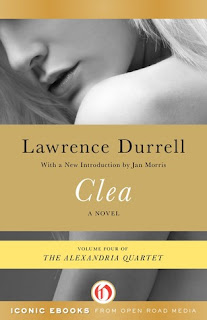 Clea is the fourth and final volume in Lawrence Durrell's series of novels known as the Alexandria Quartet.  The first three books, Justine, Balthazar, and Mountolive, tell the same intricate and fascinating story from three different points of view.  In Clea, set seven years later, we get to see what's happened to the characters in subsequent years.  Darley, the narrator of the first book, returns to Alexandria at the end of World War II, and reconnects with all the major figures from the earlier novels.  He begins an affair with Clea, who was a more shadowy presence in the earlier books, but turns out to be one of the most interesting of all the characters.

This is such a wonderful series of novels.  I read the first three many years ago, sometime during the 1980s, and don't really know why it's taken me so long to get to this final book.  In many ways, it's very different from the others, but the gorgeous, lyrical writing is the same.  The Quartet is just a truly rewarding reading experience.

Sample passage (these are the book's opening lines):


The oranges were more plentiful than usual that year. They glowed in their arbours of burnished green leaf like lanterns, flickering up there among the sunny woods. It was as if they were eager to celebrate our departure from the little island -- for at last the long-awaited message from Nessim had come, like a summons back to the Underworld. A message which was to draw me back inexorably to the one city which for me always hovered between illusion and reality, between the substance and the poetic images which its very name aroused in me.... Alexandria, the capital of memory!