I've been very lazy about posting reviews this year. So during this last week of December, I'm going to try to post short (sometimes VERY short) reports on the books I read in 2013 but failed to mention on the blog, in (roughly) the order I read them - mainly just to prevent myself from forgetting them completely.  This is one from back in March. 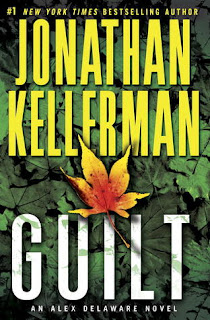 
In an upscale L.A. neighborhood, a backyard renovation unearths an infant’s body, buried sixty years ago. Soon thereafter, in a nearby park, another disturbingly bizarre discovery is made not far from the body of a young woman shot in the head. Helping LAPD homicide detective Milo Sturgis to link these eerie incidents is brilliant psychologist Alex Delaware. But even the good doctor’s vast experience with matters both clinical and criminal might not be enough to cut down to the bone of this chilling case. Backtracking six decades into the past stirs up tales of a beautiful nurse with a mystery lover, a handsome, wealthy doctor who seems too good to be true, and a hospital with a notorious reputation—all of them long gone, along with any records of a newborn, and destined for anonymity. But the specter of fame rears its head when the case unexpectedly twists in the direction of the highest echelons of celebrity privilege. Entering this sheltered world, Alex little imagines the macabre layer just below the surface—a decadent quagmire of unholy rituals and grisly sacrifice.

This is the 28th book (!) in Kellerman's Alex Delaware series, but the first one I've read.  And I was pleasantly surprised to find that even though it's obvious there's a long history involved, this particular book was perfectly accessible for someone with no previous experience with the series.  The story is definitely hardcore police procedural, miles from cozy - dead infants are never easy to read about, and that's just the first of several pretty gruesome elements.  So it might not be to every reader's taste.  But I definitely enjoyed it, and I'll be reading more of the series in the future.


She cried. It seemed genuine, but who could be sure about anything on the west side of L.A.


(Note: This review refers to an advance reader's edition of the book provided free of charge by the publisher. No other compensation was received, and no one attempted to influence my opinion.)