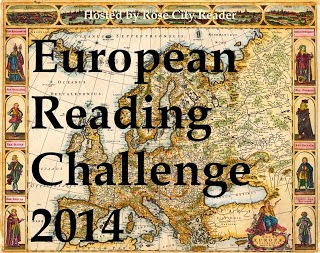 Technically, the 2013 edition of this challenge is still running (until the end of January), but I know I won't be reading any more qualifying books this month.  (You can take a look at my wrap-up post for that one.)  So, I'm signing up for the 2014 challenge.

Basically, the idea is to read books by European authors, or books set in European countries regardless of where the author comes from.  Go to the challenge announcement page (HERE) to see all the guidelines and sign up, and to see the list of eligible countries.  There are five levels of participation, and I'm signing up for the Four Star Level (Honeymooner / 4 books).  I signed up for five books last year, but found that four was a much more comfortable goal.

I don't really have a definite list of books I intend to read, but there are several I'm thinking about: