Yes, I know. I thought I was finished signing up for reading challenges for this year. Apparently I thought too soon. What can I say? It's an addiction, but such a fun one! 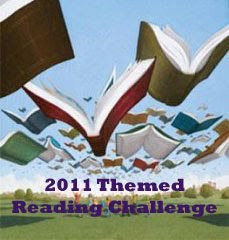 Originally hosted by Wendy at Caribousmom, the Themed Reading Challenge has been passed on to a new host - Teddy Rose of So Many Precious Books, So Little Time - but the basic guidelines are pretty much the same: "This is a six month challenge designed to help readers clear books from their to-be-read stacks which center around a common theme or themes."

The challenge runs from February 15th to August 15th, and the goal is to read and review at least five books that share a common theme. You choose your own theme, and it can be anything you want: "Themes can be geographic, genre, author, subject matter, or anything in between." You can read more about it on the challenge announcement/sign-up page here.

Last year I chose "Women of a Certain Age" as my theme (that is, books that featured "mature" female characters), and had a lot of fun with it, even though I only read four out of my five books. I thought about using that same theme again this year, but decided to go with something a little broader. And I'm also bumping myself up to the second reading level (read at least five books that share TWO themes). Could be dangerous, but we'll see what happens.

My themes will be mystery novels that feature amateur sleuths, written by female authors. The sleuths don't have to be female - just the authors. Hmmmm. That's actually THREE shared themes, isn't it? Well, anyway, here's my list of the books I'm hoping to read for the challenge (plus a few extras - because you never know):
Needless to say (so why am I saying it?), my list is subject to change. And during the course of the challenge, I'll be updating my progress on my challenge blog (here).
Posted by jlshall at 10:55 AM