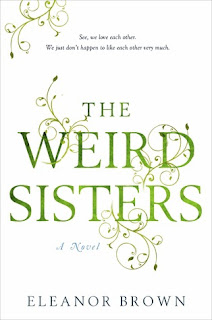 (The review refers to an uncorrected proof of the novel.)

The Andreas family is one of readers. Their father, a renowned Shakespeare professor who speaks almost entirely in verse, has named his three daughters after famous Shakespearean women. When the sisters return to their childhood home, ostensibly to care for their ailing mother, but really to lick their wounds and bury their secrets, they are horrified to find the others there....But the sisters soon discover that everything they've been running from - one another, their small hometown, and themselves - might offer more than they ever expected.

Eleanor Brown's new novel, The Weird Sisters, is well written and tells an interesting story, and I think a lot of readers will enjoy it. I very much wanted to love it, but it just wasn't my cuppa I guess. The description was so attractive; but I really had to give myself a stern talking-to to keep reading beyond the first couple of chapters.

First of all, I think Brown should be given high marks for creating a family of readers. The Andreas sisters (Rosalind, Bianca and Cordelia - "Rose," "Bean," and "Cordy") and their parents are literate and bookish people, who love reading. They hang out in bookstores and libraries - they think a library card solves nearly all problems. They don't watch TV. They take books along to read in waiting rooms and queues. They read during good times and bad. As a bookworm, I found that wonderfully refreshing.

And I thought the story of the mother's illness and the family's reaction to it was very credible and moving. So true to life, in fact, that it was hard to read at times. The girls' mother was an interesting character, and I think I'd have enjoyed the book a little more if she'd been more of a presence.

But I found it very difficult to identify with or sympathize with any of the sisters. Now that wouldn't necessarily be a problem - I've enjoyed many books in which the characters aren't to my liking. But I think the fact that I found the girls so off-putting was the main reason I didn't enjoy this book as much as I should have.

There were other reasons. One thing that bothered me was that the sisters' personalities and group dynamic were so pat - Rose as the older sister was, of course, the brainy one and the mother hen who tried to control the lives of everyone around her; Bean, the middle child, was the one bent on getting out of the nest and succeeding at a high-powered career in the big city; and Cordy, the baby and everybody's pet, was the over-indulged, irresponsible free-spirit. The girls' Shakespeare-quoting father was another irritation - I would have divorced (or strangled) him long before I'd had time to have three children with him.

And the whole idea of a group (or plural) narrator bothered me a bit, too. The novel is written in first person plural, narrated from the collective perspective of the three sisters. That was intriguing at first, but I found it more and more disorienting as the narrative became more involved. After a while, it felt a little like communicating with the Borg.

Maybe it's just that I'm not a sibling, or that I'm from the wrong generation. Or maybe it's because I've read several other books recently that feature grown-up sisters living (or returning to live) with their parents. I don't know. Early in the novel, Brown has the sisters explain that when they call themselves "weird," they're thinking of the original "wyrd" and the way in which Shakespeare used it - "supernatural strangeness" or "fated." But the three young women in The Weird Sisters didn't seem particularly weird or wyrd to me - just a little annoying.

Note: This review refers to an uncorrected proof of the novel provided free of charge by the publisher, through LibraryThing's Early Reviewer program. No other compensation was offered or provided, and no one attempted to influence my opinion of the book.
Posted by jlshall at 7:07 AM