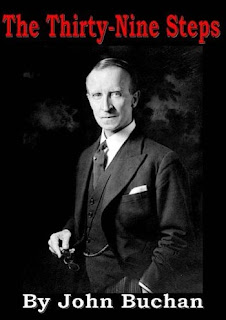 Richard Hannay has just returned to England after years in South Africa and is thoroughly bored with his life in London. But then a murder is committed in his flat, just days after a chance encounter with an American who had told him about an assassination plot which could have dire international consequences. An obvious suspect for the police and an easy target for the killers, Hannay goes on the run in his native Scotland where he will need all his courage and ingenuity to stay one step ahead of his pursuers.

That's a very abbreviated synopsis of the story. But rather than try to describe the plot in more detail, I'll just suggest you take a look at the very nicely done Wikipedia article on the novel (here). It even has a little rundown of all the various film and radio versions that have been done over the years (most of them very different from the original book).

The Thirty-Nine Steps has been on my must-read list for decades now, and I have the 2010 Decades Reading Challenge (and the free e-book offer from Amazon) to thank for finally moving me beyond the "someday" promise. Overall, I enjoyed it very much - even though the "ripping yarn" type of adventure novel isn't usually something I take to. Buchan was a talented writer and he keeps the action moving right along at a pleasant pace. He maintains a good balance of dialogue and descriptive passages, and includes touches of humor here and there. All in all, this was a good, fast read and an entertaining, if somewhat far-fetched tale.
Posted by jlshall at 3:55 PM