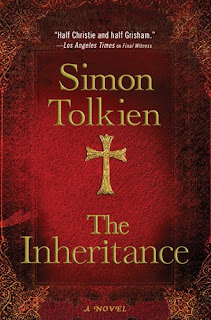 When a famed Oxford historian is found dead in his study one night, all evidence points to his son, Stephen. About to be disinherited from the family fortune, Stephen has returned home after a long estrangement—and it happens to be the night his father is shot to death. When his fingerprints are found on the murder weapon, Stephen’s guilt seems undeniable. But there were five other people in the manor house at the time, and as their stories slowly emerge—along with the revelation that the deceased man was involved in a deadly hunt for a priceless relic in Northern France at the end of World War II—the race is on to save Stephen from a death sentence.

Everyone has a motive, and no one is telling the truth. Unwilling to sit by and watch the biased judge condemn Stephen to death, an aging police inspector decides to travel from England to France to find out what really happened in that small French village in 1945—and what artifact could be so valuable it would be worth killing for.

I have to admit I picked this one up because the Tolkien connection caught my attention: Simon is the grandson of J.R.R. Tolkien. And while I'm not a huge Lord of the Rings fan, I did read and enjoy the epic fantasy saga many years ago in college. (Frodo lives!) So I was immediately interested. And I was not too surprised (and very relieved) to find that Simon is his own man, literarily speaking. He has his own style and voice, and even though the story does revolve around the search for a lost ancient artifact, there are absolutely no intimations of Middle Earth in this book.

The blurb on the front cover calls The Inheritance "half Christie and half Grisham," and while I can't vouch for the Grisham comparison, Christie's Witness for the Prosecution did come to mind occasionally as I was reading. There's the courtroom setting, of course; but I believe the Christie-ish atmosphere is the result of the book's being set in the 1950s more than any similarity of plot or style.

There's a lot going on in this book, and it mixes several different genres – historical fiction, legal thriller, traditional whodunit, revenge drama, family saga. And Tolkien does a fine job of keeping the mix from getting confusing or off-balance. He does give away the identity of the murderer rather early in the book, but you have to be really observant to notice; and he still manages to keep you guessing and rethinking and going over the clues right up to the end. The book also includes some fairly disturbing bits of brutality and one or two really nasty characters – not uncommon in a thriller, of course, but definitely something to keep in mind if you're looking for something a little more "cozy."

So, would I recommend it? Well, it's probably not an "A" effort, but I'd say it's a solid "B+" – so, yes, I think it's definitely a book worth reading. And Tolkien's Detective Inspector William Trave of the Oxfordshire CID is a wonderful creation, worthy of his own series, or at the very least a sequel.
Posted by jlshall at 3:13 PM