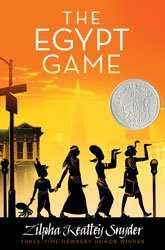 The first time Melanie Ross meets April Hall, she's not sure they'll have anything in common. But she soon discovers that they both love anything to do with ancient Egypt. When they stumble upon a deserted storage yard behind the A-Z Antiques and Curio Shop, Melanie and April decide it's the perfect spot for the Egypt Game.

Before long there are six Egyptians instead of two. After school and on weekends they all meet to wear costumes, hold ceremonies, and work on their secret code. Everyone thinks it's just a game, until strange things begin happening to the players. Has the Egypt Game gone too far?

I loved this little book! I've heard about it for years, and the title always intrigued me. As a kid, I was fascinated by anything about ancient civilizations, especially Egypt. That's still one of my interests, so I'm not sure why it took me so long to get to Zilpha Keatley Snyder's wonderful story. And although I actually read this back during the summer, it would have been a perfect read for Banned Books Week - it's been challenged several times over the years, mostly because of the concentration on magic and "pagan" religious ceremonies. But, being something of a pagan myself, that didn't bother me at all.

On the contrary, I think the book teaches a lot of good lessons without being at all preachy. I loved the fact that while the characters represent a mix of several different ethnic groups, Snyder doesn't make too big a deal about it. And I really enjoyed the emphasis on learning about other times and cultures. I think any book that tries to convince kids that studying history can be fun should be welcomed and rewarded. And, thankfully, others agree with me on that - The Egypt Game was a winner of the Newbery Honors award in 1967.

There's also a mystery running through the book - another reason to like it. But it does involve some violence (nothing graphic), which might be a little frightening for younger readers; so I'd definitely advise parents to read it first before passing it on to the little ones. Also, a lot of the slang is very firmly situated in the era in which the book was written: Being an archaeologist is said to be a "kooky" ambition for a girl; when something is good it's "tough"; the kids "play it cool," and they use other quaint expressions like "holy cow," "oddball," "man-oh-man," and "sheesh." Most kids today (and probably most of their parents, too!) are likely to need some explaining there. Of course, being undoubtedly kooky and definitely an oddball (and an ancient oddball, at that), I found it all wonderfully nostalgic and completely charming - the slang, the book, and the Egypt game itself.