Reading Report: Cards on the Table 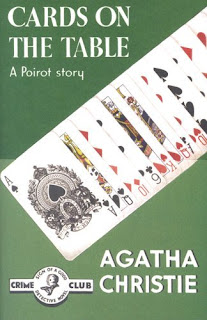 At the start of Agatha Christie’s 1936 novel Cards on the Table, Belgian super sleuth Hercule Poirot runs into an old acquaintance at a charity exhibition of snuffboxes in London. Mr. Shaitana is well-known for his eccentric personality and the flamboyant parties he hosts. But his next soiree promises to be even more flamboyant than usual: Shaitana says he “collects” murderers, and intends to display a few of them at the party. Poirot obviously can’t pass up such an enticing invitation, even though he thinks it a most dangerous move.

It turns out that Shaitana has invited eight people to his dinner party: four “murderers” and four detectives. After dinner, the guests divide up to play bridge – sleuths in one room, and the alleged killers in another along with their host, who watches but does not take part in the games. And (you guessed it, right?) at the end of the evening, Shaitana is discovered dead in his chair by the fire. No one left the room. No one came into the room. No one witnessed anything. Perfect locked room mystery. Which one of the guests killed the host? And why? Did it have something to do with whatever crimes Shaitana suspected they’d committed in the past?

This work is a little different from most of Agatha Christie’s whodunits in that there are really only the four suspects, and we aren’t presented with the cast of thousands we usually get in her novels. It’s also a little unusual because in order to solve the mystery of Shaitana’s murder, Poirot and company have to investigate the past crimes (if any) of the other four guests. So Christie has to keep a lot of balls in the air, but she’s an expert juggler. For a while there I thought she might be getting a bit off balance in the last couple of chapters, but I needn’t have worried. Dame Agatha had everything completely under control, as usual.

This was a great read – but then, I always say that about all Agatha Christie mysteries. And one of the best things about the book is that it represents the first major appearance of Poirot’s friend and sometime-assistant, Mrs. Ariadne Oliver (she’d been introduced, briefly, in one of Christie’s early short stories). Ariadne Oliver is a wonderful character – a world-famous writer of mystery novels, and a sort of comic alter ego of Christie herself. She’s always dead certain she knows who the killer is, but she changes her mind at the drop of a hat. In this story, at one time or another, she declares each suspect to be absolutely the murderer (“I felt instinctively that there was something wrong with that man as soon as I saw him. My instincts never lie.”) But by the end of the book, I was in complete sympathy with her – after all Christie’s twists and turns and tricks and surprises, I suspected every one of them – even the four detectives!
Posted by jlshall at 4:30 PM