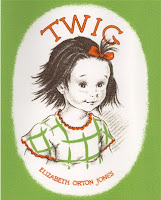 "Well, who ever heard of going to Fairyland with a plain ordinary old dress on? Just look at it, Your Majesty!" said Twig. "And just look at these old shoes!"

The Queen looked at them and smiled. "They're only on the outside of you, Twig," she said. "It doesn't matter how plain or how ordinary or how old the things on the outside are, you know. It's what is inside that matters."

This book was first recommended to me by my friend Carol Sue when we were in second grade together. She absolutely loved it, and talked about it almost incessantly for about a week. And I was very attracted to it at first – the pictures were wonderful and I loved the idea of being able to shrink down to the size of a sparrow and sit on a dandelion leaf. However, as soon as CS told me that one of the characters in the book was a cockroach, I said "No way, José!" (or the mid-1950s, second-grade equivalent of "No way, José"), and that was that.

But I remembered Twig over the years, and as I grew up and became more liberal about reading-matter taboos, I always intended to try to find and read the book that had made my little girlfriend so happy all those many years ago. And thanks to the Young Readers Challenge, now I have.

Twig is a little girl who lives with her Mama and Papa in an apartment on the fourth floor of a "high sort of house" in the city. She doesn't have other children around to play with, and her world is the back yard, "bounded by houses on three of its sides and by a high fence on its other. Outside the fence was an alley. Inside, was a garbage can."

In the midst of this rather bleak little world, where no grass grows, Twig has discovered a dandelion plant with long leaves "that were bent over like the branches of a tiny tree." And when she finds a discarded tomato can with a rip in its side that resembles a doorway, she washes it out and places it next to the dandelion plant, delighted to see that it looks just like a little house – "just the right size for a fairy."

And eventually a fairy does come along – not just any fairy, but the Queen of Fairyland. But before she shows up, we're introduced to a lot of other wonderful characters, along with Twig. There's the Sparrow family – Sparrow and Mrs. Sparrow and their four children (who are just eggs at the beginning of the story). And there's Old Boy, the ice-wagon horse. And Old Girl, the cat who gives concerts every night.

And then there's Elf, a tiny little fellow dressed in a potato-skin suit, who shows up with a magic book and manages to shrink Twig down to his size – tiny enough to set up housekeeping in the upside-down tomato can. They use one of Twig's Mama's thimbles for a cook pot, and toothpaste tube caps for plates. And Twig sweeps the floor with an old feather from Mrs. Sparrow. And at one point Elf does come home with the aforementioned cockroach (called "Chummie"), but Twig shoos it away very quickly.

When they're not tidying up their tomato-can abode, Twig and Elf visit Mrs. Sparrow in her nest, and sit on her eggs while she goes in search of food and her wandering spouse. The two tiny playmates climb up Old Boy's tail and take a ride inside his ears. And Elf brings Twig a pair of butterfly wings that she attaches to her back and uses to take a little flight around the backyard – before the wings fly off on their own again.

Twig is a very appealing and resourceful little girl. And, of course, when she gets the chance to go live in Fairyland with Elf and the Fairy Queen, she decides she really would rather stay with her Mama and Papa. But during her adventures with Elf and all the other characters, she's learned that she doesn't need a magic book to perform magic – she can make magical things happen anytime she wants, just by using her imagination.

Twig would be a perfect book for reading aloud to preschoolers – most likely over a period of a few days. Since it's aimed at the 4-8 age group, it would probably also work for kids who've learned to read on their own, although I'm not sure how well such an old-fashioned tale would hold their attention. It was first published in 1942, and definitely has a pre-war feel to it.

Elizabeth Orton Jones, in addition to winning the Caldecott medal for Prayer for a Child, also did the illustrations for the 1948 Little Golden Book edition of Little Red Riding Hood, which is one of the best-loved versions of that tale (and one of my childhood favorites). In Twig, the illustrations are a delight: small drawings throughout the book, as well as a number of full-page color pictures.

It's a very cute story – it even has a bit of a "Wizard of Oz" twist at the end. I can see why Carol Sue liked it so much – cockroaches notwithstanding.
Posted by jlshall at 8:27 AM