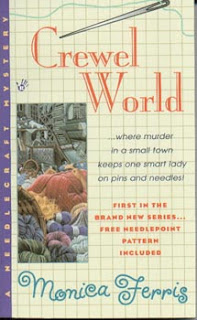 If she could get into the rhythm of the needlework, she would find peace. That's why she loved needlepoint – it worked like meditation. It was better than meditation, actually, because after a while you found you had both peace of mind and a work of art. [Chapter 9, p. 116]

In addition to the "formal" reading challenges I have going this year, I've set up a personal challenge for myself to complete the series of Betsy Devonshire mysteries by Monica Ferris.

Now in theory, I believe you should always start out with the first book in a series. But somehow I usually manage to jump right into the middle somewhere. Thus, I started Ferris's "Needlework" series with the fifth title, A Murderous Yarn, and followed that with the fourth book, Unraveled Sleeve. Not very organized, I know – but I loved the series and knew I wanted to read them all. So I figured it was time to knuckle down and read the opener.

Crewel World introduces us to Betsy Devonshire and her younger sister Margot Berglund. In California, Betsy's marriage to a philandering college professor has just broken up; so Margot invites her for an extended visit in Excelsior, Minnesota, where Margot owns and operates a needlework shop, the "Crewel World" of the title. The two sisters haven't seen each other for years when the story begins, and they both enjoy the reunion – in fact, Margot encourages Betsy to make Excelsior her new home and even gives her a job in the shop. The small town is friendly and Betsy is settling in comfortably when disaster strikes – Margot is found murdered, and Betsy is drawn into the search for her killer.

Having already read a couple of the later books, I missed out on a good deal of the mystery in this one – I knew that several of the suspects were innocent and would return as regulars in the later novels. But that certainly didn't spoil the enjoyment. And although I sussed out the culprit pretty early on, watching Betsy develop both her sleuthing and needlework skills was lots of fun (if murder can ever be considered fun).

Of course one of the main attractions of the books, for me anyway, is their emphasis on the "needle arts" – I've always been an admirer if not much of a practitioner. And they're definitely cozy mysteries – set in a small town with a lot of interesting characters and day-to-day detail, and not a lot of gore or mayhem – another reason to keep me reading.

But I think the main thing I like about the books is Betsy herself. Already 55 when the series begins, she's not quite sure where life is leading her:

Betsy remembered reading somewhere that while men are scared of birthdays ending in zero, women are frightened by birthdays ending in five. Certainly Betsy was. Fifty-five is no longer young, even when considered while you were in good spirits. Fifty-five can see old age rushing toward it like a mighty tree axed at the root. All too soon it would be crash: sixty! [Chapter 1, p. 10]

Betsy Devonshire is someone a reader of a certain age can really identify with.

(Each book in this series includes a free needlework pattern. In this first book, the pattern is a magnificent Chinese horse, adapted from a T'ang Dynasty sculpture – a tie-in with the book's plot, and much too ambitious for the inexperienced needle-worker. I believe the patterns in most of the later books have been a bit less intricate. You can learn more about the Betsy Devonshire books and their author by visiting the Monica Ferris web site.)
Posted by jlshall at 11:52 PM