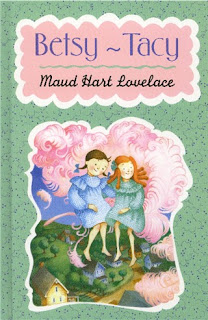 First there was just Betsy Ray, a four-year-old girl with plump legs and brown braids, living with her mother and father and her eight-year-old sister Julia in a small yellow cottage, "the last house on her side of Hill Street," in a town named Deep Valley. But even though there are plenty of other children on Hill Street, there are no other little girls just her age, so when a new family moves in across the street, Betsy is thrilled to find that one of the many children in the family is another little four-year-old girl, named Tacy (short for Anastacia).

Tacy is as thin as Betsy is plump, and her hair is red and curly. At first, the two girls don't hit it off – Tacy is painfully shy ("bashful," as Tacy's older sister Katie always tells people) and it takes a while for the two to get to know each other. But after they do, they become inseparable: "It was difficult, later, to think of a time when Betsy and Tacy had not been friends. Hill Street came to regard them almost as one person." So they became Betsy-Tacy.

Maud Lovelace's Betsy-Tacy is the story of the first year of friendship between the two little girls, with Betsy taking the lead in most of their adventures. Along the way, the girls start school, explore their village, and meet their neighbors. They play paper dolls and dress-up, and help their older sisters color Easter eggs. They climb trees, make snow angels, and turn a piano crate into a playhouse – one of my favorite episodes because I had a similar playhouse when I was about that age, made from a box that a refrigerator came in.

Lovelace combines the reality of their situation with a liberal sprinkling of fantasy, mostly in the form of really magical stories made up by Betsy. In one of their early meetings, the two ride through the sky on feathers and look down on their houses and neighbors below. Well, not really. But Betsy and Lovelace have a way of enveloping both Tacy and their readers in the magic.

Not all of the book is charming fantasy. There's a bit of real-life trauma thrown in. When Mrs. Ray has a baby, Betsy has a little trouble adjusting to not being the youngest member of the family anymore. And there's a death in one of the families, that's very surprising and sad.

Betsy-Tacy is the first of a series of books Maud Lovelace wrote about the two girls and their friend Tib, who makes her first appearance at the very end of this book. According to most histories of the books, Lovelace based the character of Betsy on herself and used incidents in her own life for story lines. The books are set in the very late 19th and early 20th centuries, and are appealingly slow-paced and nostalgic. For many years, it was hard to find the books outside libraries; but the huge cult following that's recently developed has led to new editions being issued.

I'm not sure how this book would go over with youngsters today – it's very old-fashioned and, I suppose, quaint. I've been meaning to read it for years. And now that I have, I'm very happy I finally met Betsy and Tacy, and I'm looking forward to getting to know Tib. But I certainly wish I'd discovered their books as a child – I would have loved them.

You can learn more about Maud Hart Lovelace, and Betsy and Tacy and the books by visiting the Betsy-Tacy Society Home Page.
Posted by jlshall at 4:17 PM