Reading Report: Henrietta Sees It Through 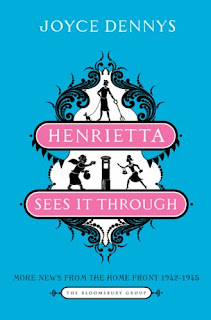 World War II is now in its third year and although nothing can dent the unwavering patriotism of Henrietta and her friends, everyone in the Devonshire village has their anxious moments. Henrietta takes up weeding and plays the triangle in the local orchestra to take her mind off things; the indomitable Lady B, now in her late seventies, partakes in endless fund-raising events to distract herself from thoughts of life without elastic; and Faith, the village flirt, finds herself in the charming company of American GIs. With the war nearing its end, hope seems to lie just around the corner, and as this spirited community muddles through, Lady B vows to make their friendships outlast the hardship that brought them together.

Okay, this is getting ridiculous. It's the end of March and I haven't posted a report or a review since sometime back in January! I haven't been getting a massive amount of reading done so far this year, but I have read a few things. So in the next several days, I'm determined to make myself sit down and write a bit about each one. Really. I mean it.

I'll start with my most recent read. Henrietta Sees It Through: More News from the Home Front 1942-1945 is a compilation of a series of short pieces Joyce Dennys wrote for the Sketch magazine, voicing the frustrations and tribulations she faced as a doctor's wife in wartime England. These writings were later pulled together and republished as two books: Henrietta's War in 1985, and this one in 1986. And now the Bloomsbury Group has reissued both works in handsome new paperback editions.

Written in the form of a series of letters sent to the narrator's childhood friend Robert, this is a charming little book with a wonderful central character. Henrietta is Dennys' imaginary alter-ego, and a lovely creation. Long-suffering, kindly, and self-deprecating, but possessed of a sharp sense of humor - she's instantly sympathetic and appealing. And the many short vignettes of village life during WWII are (for the most part) delightfully funny and lively. But the sobering aspects of a world at war are always there, just beneath the surface.

Reading this was a lot like getting enmeshed in a really good BBC mini-series. Very addictive and a lot of fun.

Note: My copy of this book was provided free of charge by the publisher, through LibraryThing's Early Reviewer program. No other compensation was offered or provided, and no one attempted to influence my opinion of the book.
Posted by jlshall at 10:34 AM