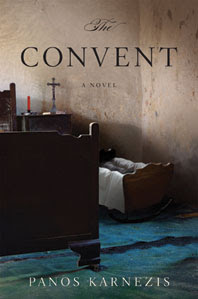 This review refers to an advance reading copy of the novel.

The crumbling convent of Our Lady of Mercy stands alone in an uninhabited part of the Spanish sierra, hidden on a hill among dense forest. Its inhabitants are devoted to God, to solitude and silence—six women cut off from a world they've chosen to leave behind. This all changes on the day that Mother Superior Maria Ines discovers a suitcase punctured with air holes at the entrance to the retreat: a baby, abandoned to its fate. Is it a miracle? Soon she will find that the baby's arrival has consequences beyond her imagining, and that even in her carefully protected sanctuary she is unable to keep the world, or her past, at bay.

The description of Panos Karnezis new novel, The Convent, made me think the book would be right up my street. Even though I'm not really religious (having left my father's Catholicism and my mother's Methodism far behind, and taken up with my husband's heathen Presbyterians years ago), I do for some reason love reading novels about convents. In recent years, I've thoroughly enjoyed Muriel Spark's The Abbess of Crewe, Mark Salzman's Lying Awake, and Sarah Dunant's Sacred Hearts, to name just a few. And many years before those, there was Rumer Godden's In This House of Brede (overdue for a reread, I believe). So I was hoping for the best with this new addition to the field.

But after finishing this novel, I couldn't help thinking of the old Peggy Lee tune, "Is That All There Is?" The book felt a bit like a first draft – a good idea, but one that needed to be fleshed out a little more before publishing. I enjoyed it, but there were things about it that bothered me.

For one thing, most of the characters never really took shape as separate individuals. The Mother Superior and her nemesis Sister Ana were distinct enough. However, while the other nuns had names too, they might as well have been called Nun Number One, Nun Number Two, etc. And the child didn't come across as a real child, either – he hardly ever cried, or made any kind of fuss. And maybe I just don't have enough experience with infants, but it seemed odd to me that as a newborn he was able to drink from a bowl or cup without any problems or mess. I understand that he was functioning as a symbol in the story, but I would have been happier if he'd functioned a little more like a real baby, too.

But I guess the thing that bothered me the most was the story itself. When the deep dark secrets at the heart of the novel are revealed, you experience a sort of "That's it?" moment. The big secrets turn out to be so predictable that everything seems kind of pointless. However, Karnezis is a very skillful craftsman, and there's some beautiful writing in The Convent. It kept my attention right up to the end, even with all its imperfections. I'd certainly recommend it – just be ready to suspend an awful lot of disbelief.

[Note: I received the advance reading copy of this novel free of charge from the publisher, through Library Thing's Early Reviewer program. No other form of compensation was offered or accepted, and no one attempted to influence my opinion of the book.]
Posted by jlshall at 2:50 PM