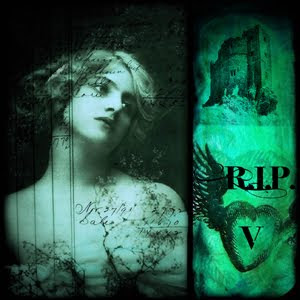 Wow, I am soooo late getting this done. Being on the road for most of November has really slowed down all my blogging activity for the month. But I did want to do a short wrap-up post for the RIP/V Challenge, as it's one of my favorite reading events – something I wait for all year long!

Reading for the RIP Challenge is always fun because it encompasses almost all my favorite genres. This year I did pretty good on the reading part of the challenge, but not so great when it comes to writing reviews of what I read (still working on that). I signed up at the Peril-the-First level (four books), but I actually finished six books. Here's what I read (with links to the few reviews I've done up to now):
And I finished everything up by spending Halloween night reading that last book (the Shirley Jackson), and watching The Haunting (the original Robert Wise version from 1963, with Julie Harris, Claire Bloom, Richard Johnson and Russ Tamblyn). Had a great, spooky time and drove the hubby crazy.

This year I also took advantage of the new addition to the challenge, Peril on the Screen. I'm not going to review these, but here's my list of films/TV shows watched:
Gee, just one more and I'd have the perfect number – 42!

I want to say a huge thank you to Carl V. at Stainless Steel Droppings for hosting this again. I don't think I could get through October without it!
Posted by jlshall at 3:45 PM