Reading Report: The House Next Door 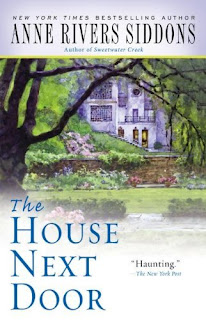 In Anne Rivers Siddons' novel The House Next Door, Colquitt and Walter Kennedy, both thirty-something, are a happily married couple living in an upscale, comfortable suburb of Atlanta, Georgia. Childless by choice, they keep themselves enjoyably busy with their careers and long, lazy weekends relaxing and partying with their neighbors. But then construction of a new home – beautiful but disturbingly avant-garde in design – begins in the empty lot next door, and their easy friendships and relaxed get-togethers are suddenly marred by strange accidents and inexplicable happenings.

Although Colquitt doesn’t want to let herself believe in haunted houses, she can’t ignore the mysterious and violent goings-on next door. The house really does seem to prey on the weaknesses of its succession of inhabitants, relentlessly destroying them and the neighbors who befriend them – driving them to disgrace, madness and death.

The House Next Door is an interesting reworking of the standard haunted house theme. This time the house in question isn't a creepy ancient structure with a history of weird occurrences over the years; it's a brand spanking new place with an out-on-the-edge-of-modern design. And the incidents that drive family after family away from the place could just be seen as tragic coincidences. Is the place really "haunted"? Or is Colquitt simply letting her "sensitive" nature get the better of her?

I discovered this book after stumbling upon the 2006 made-for-TV movie based on it. I wasn't thrilled with the movie itself, but the story got my attention, especially when I found out the book was written by Siddons. I'd always wanted to read something by her, and this seemed like a good place to start – although I gather it's very different from all the rest of her writing. I also wanted to see if the ending had been changed for the film, and I'm glad to say it had – the book's ending is much more frightening and disturbing, if not any more satisfying.

I enjoyed this book a lot, and I'd definitely recommend it to anyone looking for something scary and a little different. I'm not sure I'd go so far as to agree with Stephen King that it's "one of the finest horror novels of the 20th Century" but it's certainly a fun, fast, spooky read.