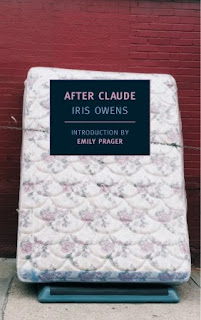 This review refers to an advance uncorrected proof of the reissued novel.

Harriet has left her boyfriend Claude, “the French rat.” At least that is how she prefers to frame the matter. In fact, after yet one more argument, Claude has just instructed Harriet to move out of his Greenwich Village apartment—not that she has any intention of doing so. To the contrary, she will stay and exact her vengeance—or such is her intention until Claude has her unceremoniously evicted. Still, though moved out, Harriet is not about to move on. Not in any way. Girlfriends circle around to give advice, but Harriet only takes offense, and you can understand why. Because mad and maddening as she may be, Harriet sees past the polite platitudes that everyone else is content to spout and live by. She is an unblinkered, unbuttoned, unrelenting, and above all bitingly funny prophetess of all that is wrong with women’s lives and hearts—until, in a surprise twist, she finds a savior in a dark room at the Chelsea Hotel.

Iris Owens' 1973 novel After Claude is an odd little portrait of a woman going off the rails. At times funny, at times very sad, it's a fascinating character study and an interesting early attempt at creating a female anti-hero. It was very well received at the time of its original publication; Owens was hailed as a fresh new voice in the throng of women novelists, and her book was even compared to Erica Jong's Fear of Flying. Understandable, I suppose, because Iris Owens writes like a dream – too bad she wasn't more prolific (I'm not likely to seek out any of the pornographic stuff she wrote under her Harriet Daimler pseudonym).

But while Jong's heroine is just as free-wheeling and libidinous as Owens' Harriet, Fear of Flying is a much richer and more thoughtful book, and its central character much more sympathetic. In the end, there's really not much that's admirable about Harriet – she's profane and profligate, opinionated and egotistical. She claims to be sensitive and caring; in reality she's selfish and dependent. She spends most of the book trying to trick or harangue the various male characters into taking care of her so she won't have to work for her living. And she takes an instantaneous dislike to every female she sees.

All of which makes me almost embarrassed to say I ended up enjoying this book much more than I thought I would when I started it. After the first few pages of Harriet's "mad and maddening" narration, I was almost ready to abandon the book. The experience was a little like being trapped in a dark, messy room and being forced to listen to Joan Rivers standup routines for forty-eight hours without let-up. But listening to Harriet is also like viewing the proverbial train wreck – it's horrendous, and yet you can't look away.

Even though I never really thought of myself as a feminist, I believe I probably would have liked this book a lot more if I'd read it when it first appeared in the early '70s. Back then I would most likely have seen the work as funny, edgy, and iconoclastic. But it hasn't aged well. Or maybe that's just me who hasn't aged well.

I should mention that the advance copy I read lacked the introduction by Emily Prager, which I'd like to take a look at. I do applaud NYRB for their courage in reissuing this work, since it's probably not going to be a huge seller. Worth reading, I think, but definitely not for everyone.

[Note: I received the advance reading copy of this novel free of charge from the publisher, through Library Thing's Early Reviewer program. No other form of compensation was offered or accepted, and no one attempted to influence my opinion of the book.]
Posted by jlshall at 4:00 PM