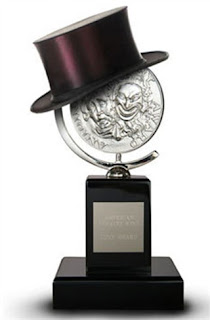 OK, I'm not going to try to blog the Tonys or anything. But I am watching. And Angela Lansbury just won the award for Best Performance by a Featured Actress in a Play. I'm so happy about that. I was pulling for Angela Lansbury. And she won for playing Madame Arcati in "Blithe Spirit," which makes me happy, too. I always wanted to play that role. Came close in high school, but got beat out by a girl named Peggy Jacobs who was a grade ahead of me and much weirder than I was, so a natural for the part. I played Ruth, a thankless task. Had to paint my entire body blue for the ghost scenes. Ah, the roar of the greasepaint!

OK, that's enough of that.

Oh, Liza Minnelli just won for something! That makes me happy, too. For some inexplicable reason.

Anyway, back to the show.
Posted by jlshall at 8:11 PM