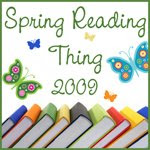 So summer is officially here now – been with us for several days already. It's also been a few days since the Spring Reading Thing ended on June 20th. This was a very easy, enjoyable "challenge," and I managed to read almost twice as many books as I thought I would during that time – although only one of them was on my original list of possible titles. I'm still working on getting all the reviews posted, and hope to get that done by the end of the week.

It would be hard to choose a favorite among all the books I read – they were a very mixed lot, and I enjoyed most of them very much. Several were books I'd had on my want-to-read list for many years, and some (like Ellen Foster and To Dance with the White Dog) were new discoveries by authors I hope to encounter again in the future. There were even a few disappointments in the bunch, but no real stinkers. I suppose the biggest surprise was The Longshot, the debut novel by Katie Kitamura, certainly a new name to watch.

Here's the list of books I read, with links to reviews:

I want to say thanks to Katrina at Callapidder Days for hosting, and to all the other participants for all the great reviews and recommendations. I've added quite a few new titles to my TBR list, which is now almost long enough to be divided up into a multi-volume set.
Posted by jlshall at 4:20 PM