Only two new finds this week. And one of them actually has been around a while even though it's just now showing up on my radar.

Not sure where I first read about Chris Ransom's debut novel, The Birthing House; but it sounds like a great psychological thriller – as one reviewer put it, "a ghost story with class." It'll be published in August. And I think it's very possible that I've heard of Syrie James's The Lost Memoirs of Jane Austen before this week, but it's only now registering with me. I discovered it while checking out the Everything Austen Challenge over at Stephanie's Written Word. Haven't decided yet if I'm going to take up the challenge, but James's book sounds like it's worth a look. 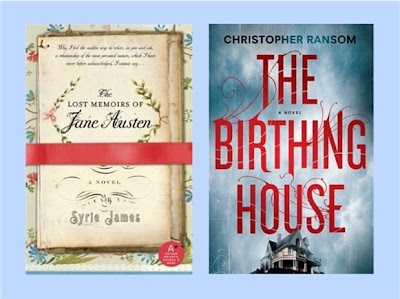 Friday Finds is a weekly event hosted by mizb17 at Should Be Reading. Participants are asked to share with other bloggers about the new-to-you books found during the week – books you either want to add to your TBR (to be read) list, or that you just heard about that sounded interesting.

So, what great new books did you find this week?
Posted by jlshall at 8:20 AM