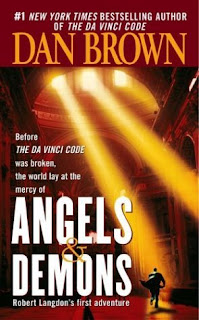 World-renowned Harvard symbologist Robert Langdon is summoned to a Swiss research facility to analyze a cryptic symbol seared into the chest of a murdered physicist. What he discovers is unimaginable: a deadly vendetta against the Catholic Church by a centuries-old underground organization – the Illuminati. Desperate to save the Vatican from a powerful time bomb, Langdon joins forces in Rome with the beautiful and mysterious scientist Vittoria Vetra. Together they embark on a frantic hunt through sealed crypts, dangerous catacombs, deserted cathedrals, and the most secretive vault on earth . . . the long-forgotten Illuminati lair.

When I read The Da Vinci Code several years ago, I liked it much more than I expected I would. It wasn't a great work of art, of course – Dan Brown's style is not the most elegant I've encountered. But it was a whopping good tale that moved fast and had interesting characters and lots of twists and turns and surprises. And that's pretty much all I ask of a thriller. The history and theology and science might not have passed muster with historians and theologians and scientists, but I knew going in that the book was fiction (that means "not real," folks) and it might play a little fast and loose with facts and accepted theories. I didn't mind that – I just enjoyed the ride.

So I expected at least a bit of a let-down when I picked up Brown's earlier work Angels & Demons. I mean, art historian Robert Langdon (the protagonist in both books) had already tracked down and preserved the bloodline of Jesus Christ. What could be more exciting than that? Well, how about saving the Vatican and possibly the rest of humanity from evil secret-society terrorists with anti-matter? (Sorry, I guess that might be a bit of a spoiler.) It would be hard to find a caper more thrilling than that, now wouldn't it? And then there's that jumping-out-of-a-helicopter-without-a-parachute trick, too. Take that, Douglas Preston!

Seriously, folks – I enjoyed this one just as much as the first Robert Langdon escapade. (OK, technically, this was the first one, I know.) It's set mostly in Rome, one of my favorite cities (even though I've never been there), all that anti-matter nonsense gives it a science fiction-y feel (one of my favorite genres), and it's all about Renaissance art, one of my favorite periods (even though I'm not actually quite that old). There's more than one mystery to be solved, just as there was in Da Vinci; but this time I didn't figure everything out quite so fast. And it's written in a play-by-play, minute-to-minute style that leaves you breathless after every short chapter – wondering just what astounding, implausible and life-threatening thrills Langdon will be involved in on the next page.

Would I recommend it? Well, sure. Why not? It's a fun read, if you don't take it too seriously. And if you don't mind more than a little gore and mayhem. I don't usually enjoy books with a lot of violence, but it didn't bother me here – maybe because the whole thing was so improbable, it didn't seem real enough to be upsetting (but you've been warned). The thing that really made my blood run cold was all that trashing of the Vatican library!
Posted by jlshall at 11:33 AM