Review: From the Mixed-up Files of Mrs. Basil E. Frankweiler 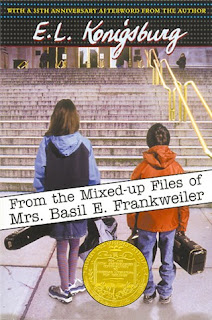 Winner of the Newbery Medal in 1968, E. (for Elaine) L. Konigsburg's From the Mixed-up Files of Mrs. Basil E. Frankweiler is the story of Claudia Kincaid and her younger brother Jamie, and their adventures in New York City when they decide to run away from their Greenwich, Connecticut home and live in the Metropolitan Museum of Art. Well, actually it's 12-year-old Claudia who decides to run away – she takes 9-year-old brother Jamie along because "he was good for a laugh" and because he has the amazing sum of twenty-four dollars and forty-three cents saved up, mostly his winnings from gambling on card games.

The two escapees pack their clean undies in their violin and trumpet cases, take the train to New York City, and spend a week living in the Met. They hide from museum guards and workmen, bathe in a museum fountain, sleep in antique beds complete with antique bedding and antique dust. They also manage to solve a mystery involving a statue of an angel that may or may not have been sculpted by Michelangelo.

Their story is narrated by the wealthy and aged Mrs. Frankweiler of the title, and she's part of the mystery. She was also my favorite character. Well, how could I not like a woman who keeps a lifetime of newspaper clippings and personal items in "rows and rows of filing cabinets that line the walls" of her private office? She has the soul of a librarian.

She also hates beauty parlors and has her butler cut her hair. Now who couldn't fall in love with that?

I'm not going to give away much more of the plot, except to say that Claudia and Jamie eventually go home, and the ending has a couple of very neat surprise twists. And along the way, Claudia learns something very valuable about what you can and can't run away from.

This book is very definitely a modern children's classic. It's been around for over 35 years now, and it still delights new readers every year – children and adults alike. There have been two film versions, and it's referenced in several other films and TV shows. So it's stood the test of time and taken a firm place in popular culture.

I enjoyed the book and would recommend it whole-heartedly to readers of all ages, but I think I missed a lot of the charm it would have held for me if I'd first read it as a child. As an adult, I kept having trouble suspending my disbelief – even in the Olden Days of 1967, two children hiding out in the Metropolitan Museum for a week would have been far-fetched stuff. And I also kept wondering about the poor parents of the runaways: What must they have been going through back in Greenwich while Claudia and Jamie were harvesting coins from the fountain, and eating breakfast every morning at the automat? OK, I know it's fantasy and not to be taken too seriously. But a lot of it felt very real, too, and I think it was that mixture of the real and the decidedly non-real that kept tripping me up.

I also couldn't help noticing how dated a lot of the book seemed. Things have really changed since 1967. How many kids today will know what an automat is? Or a transistor radio? Or an Olivetti typewriter?

But in the edition I read, the author herself addresses this problem in an afterword. And she rightly points out that "the events of September 11, 2001, that have changed forever both the conscience and configuration of New York would not have changed Claudia and Jamie. The skyline that they would have seen when they arrived in Manhattan would not have been very different from that which we now (sadly) see."

And though she admits that many things have changed since 1967 (including the author herself), one thing Konigsburg says is still true: "the greatest adventure lies not in running away but in looking inside, and the greatest discovery is not in finding out who made a statue but in finding out what makes you."
Posted by jlshall at 3:16 PM