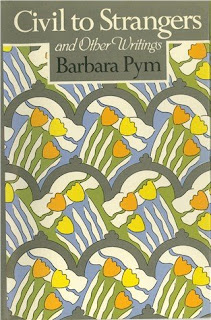 I first learned about Barbara Pym back in the early 1980s, probably not long after she died. In those days, it was still rather difficult to find her books in this country. But M. and I spent the summer of 1982 in England, and I picked up a couple of her novels at Blackwell's in Oxford - I believe they were Some Tame Gazelle and Jane and Prudence. And from the opening sentence of that first book ("The new curate seemed quite a nice young man, but what a pity it was that his combinations showed, tucked carelessly into his socks, when he sat down."), I was hooked.

As rapidly as possible, I acquired and devoured all the novels then in print. I became a Pym fanatic, even going so far as to execute my own Pym pilgrimage on a later England trip – visiting places she'd lived and her old college in Oxford (St. Hilda's). It helped that M. had become almost equally enthusiastic about her books, and indulged my whim. In fact, we liked the books so much, we started forcing them on friends and colleagues – sort of forming our own little Barbara Pym fan club for a time.

While I was reading the novels, I discovered A Very Private Eye, the "Autobiography in Diaries and Letters," edited by her sister Hilary Pym and Barbara's friend and literary executor, Hazel Holt. It was a wonderful, fascinating look at the woman behind the novels – I read it quickly and have re-read it many times since.

And after that, the darkness. Or so it appeared for a time, anyway. I'd read all the novels and the autobiography, and it seemed like that was all there was to be. Barbara Pym had died in 1980 – I would just have to content myself with re-reading her ten wonderful books (sniff).

Well, I needn't have felt so bereft – there were more works to appear, posthumously: the novels Crampton Hodnet and An Academic Question, and then a collection of pieces, including the novel Civil to Strangers. And of course, I gobbled them all up immediately – all of them, that is, except Civil To Strangers. For some reason, I was keeping that one in reserve. Saving it up – like a fine wine or the last bon-bon in the box. Just knowing that there was one more Pym out there to be discovered gave me a nice comforting, hopeful feeling.

And then the Winter Reading Challenge came along, and I said, "why not?" and pulled out my last Pym. Dear Barbara.

Although not published until after her death, Civil To Strangers was actually the second novel Barbara Pym wrote – in 1936 when she was twenty-three, after the first version of Some Tame Gazelle was rejected by several publishers. And as Hazel Holt says in her introduction, it has "all the confidence of youth."

The novel is the story of Cassandra Marsh-Gibbon and her novelist husband Adam who live in the Shropshire village of Up Callow; and as the dust jacket says, "both the village and Cassandra's marriage are thrown into upheaval when a mysterious Hungarian moves into town." And I'm not going to give away much more than that. But the story of Cassandra and Stefan Tilos, and whether they will or won't (or have or haven't) run off to Budapest together, is just the central narrative around which a number of other tales are woven. And all the familiar Pym character types are represented – the Rector and his family; Mr. Paladin the very eligible young curate; the aging bachelor Mr. Gay and his spinster niece Angela, who are "still hoping that there was a rich woman or an eligible husband in the town whom they had somehow missed in their search."

Barbara Pym has often been compared to Jane Austen (unfair, I think, to both authors), and this is probably the most Austen-like of all her books. In fact, I was a little surprised at first at how little it seemed to resemble the later novels. But after a few chapters, the familiar Pym voice started to emerge and I realized that it's actually one of her most comic works. Only Barbara Pym could have written lines like these:

"Holmwood is let," said Mrs Gower in tones of satisfaction, "and to a foreigner!"
"Oh!" Mrs Wilmot gasped. "Are you sure it's true?"
"Oh yes," Mrs Gower replied. "I saw him coming down the drive. Quite dark and wearing a black hat."
"Really . . . " mused Mrs Wilmot, a smile stealing over her eager little face. After the black hat there could of course be no doubt. [Chapter 5, p. 43]

"I daresay he is going to Birmingham," said Mrs Gower, still on the subject of Mr Tilos.
"Yes, perhaps he is," said Mr Gay lazily. "Let us be thankful that we are not going there." [Chapter 18, p. 121]

"Science is weaker than Nature," said Adam positively. He looked as if he were about to quote Wordsworth, but Cassandra stopped him in time. [Chapter 25, p. 169]

And the whole of Chapter 14, where all the characters come together for a bridge party and get to know their newly arrived foreign neighbor for the first time, is absolutely perfect Pym. Hardly anything happens, but it's quietly hilarious just the same.

The novel is included in a collection (under the title Civil To Strangers and Other Writings) along with several more works also unpublished at the time of Pym's death. They're all worth reading, of course; and the final piece, "Finding a Voice," is especially interesting to those of us who are under the Pym-ish spell. It's a transcription of a radio program she did for the BBC in 1978, part of a series by well-known writers speaking about how they found their own personal writing styles.

In her introduction to the collection, Hazel Holt says Pym was "pleased to be asked to contribute [to the program], since it was a confirmation at last of her position as a professional writer." In the BBC talk, Pym asks if it's enough just to write for oneself if nobody else is going to read it. And she comes to the conclusion that, though she might not go on writing if absolutely no one were reading, so long as a few people are there "to spur me on," she'll go on: "So I try to write what pleases and amuses me in the hope that a few others will like it, too."

And I'm so glad she did go on. But what am I going to do now that I've read my last Pym? Start at the beginning and read them all again, I suppose. Because there's no one quite like her.

(For an introduction to Barbara Pym and her work, you can visit the "Official Web Site" of the Barbara Pym Society at http://www.barbara-pym.org/.)