If Morning Ever Comes, by Anne Tyler 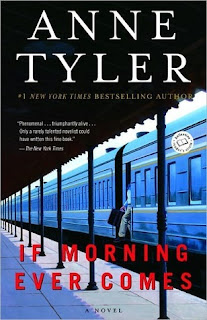 
Ben Joe Hawkes is a worrier. Raised by his mother, grandmother, and a flock of busy sisters, he's always felt the outsider. When he learns that one of his sisters has left her husband, he heads for home and back into the confusion of childhood memories and unforeseen love.


Ben Joe Hawkes is 25 years old and a student at Columbia Law School when he begins to feel his North Carolina roots calling him home. It's an odd combination of homesickness, impatience with the icy New York winter, and just general restlessness -- but it's an irresistible urge and he soon finds himself back in the midst of the family and townsfolk he hasn't seen for a number of years.

Ben Joe was raised in a house full of women (mother Ellen, Gram, six sisters), and they're all still there. Even his older sister Joanne who had moved away, married and had a daughter of her own, has left her husband and returned (with her child) to her old room in the family home. Will she stay, or come to her senses (as Ben Joe sees it) and return to her marriage and husband Gary? And the situation is further complicated by the fact that Ben Joe's first sweetheart (a girl he hasn't seen in years) has moved back to town after the death of her parents and younger sister in a car accident. Will seeing her again affect Ben Joe's decisions about his future? Oh, and we also have all those revelations about the marital break-up of Ben Joe's parents and the "other woman" in their story.

Complicated, yes. But Anne Tyler puts everything together perfectly. There's even a bit of a surprise ending. Well, maybe "surprise" isn't the right word -- but certainly something I didn't really see coming. Hard to believe this was her debut novel, back in 1964 when she was just 22 years old -- it's such a skillful and mature piece of writing. True, there are distinct hints of Eudora Welty in places (and Tyler has admitted Welty was an early influence), but overall the voice is unique and assured. I've read a few of Tyler's later books, and liked some more than others; but this is definitely one of my favorites.