Catching Up With: The USA Fiction Challenge 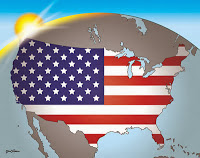 Back in 2014, I signed up for the USA Fiction Challenge, and set out to read at least one book set in each of the fifty states (plus Washington DC). Hosted by Kerrie of Mysteries in Paradise, it was intended to be an ongoing challenge with no official ending date. That was perfect for me, of course, since I'm one of the world's slowest readers. But after the first year or so I stopped keeping track of my progress on the challenge, and it mostly slipped my mind.

Until this month, that is. A few days ago, I did a little checking and found out that the challenge still seems to be active! (Thank you so much, Kerrie!) So I'm making it one of my priorities this year -- maybe not completing the challenge (I'm nowhere near the finish line), but at least making a bit of progress.

Here's my list of states and books I've read, with links to any reviews I've done. As you can see, I still have a long way to go. But it's a fun challenge and it's introduced me to quite a few new authors.
I have a list of possible books from each state, over on my challenge blog (see it HERE), but I'm always looking for new suggestions if anyone has any ideas.