A Murder is Announced, by Agatha Christie 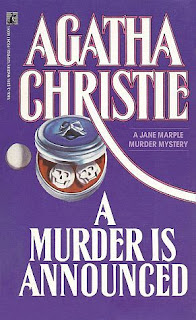 
A Murder is Announced is a staple of crime fiction and is often considered the best of all the Miss Marple novels. The villagers of Chipping Cleghorn, including Jane Marple, are agog with curiosity over an advertisement in the local gazette which reads: ‘A murder is announced and will take place on Friday October 29th, at Little Paddocks at 6.30 p.m.’ A childish practical joke? Or a hoax intended to scare poor Letitia Blacklock? Unable to resist the mysterious invitation, a crowd begins to gather at Little Paddocks at the appointed time when, without warning, the lights go out….

... and, of course, murder happens. And would you believe it -- Miss Jane Marple just happens to be staying at the local hotel where the victim worked. And Inspector Craddock, who's investigating the goings-on, just happens to be the godson of Sir Henry Clithering, the ex-commissioner of Scotland Yard who is a confirmed fan of Miss Marple. Sir Henry strongly encourages Craddock to avail himself of the old bag's the talented spinster's sleuthing abilities. And the game's afoot.

I haven't read all the Miss Marple books, but I do think this is my favorite of the ones I've read so far. It has all the classic Christie touches -- village setting, lots of quirky, intriguing characters, hidden identities, several red herrings, and a lovely chatty summing up by la Marple in the final chapter. What more could you want?

In addition, this entry in the series has a strong emphasis on the post-WWII society emerging at the time. Several characters comment on the fact that the world is changing, with "new people" and new ideas making life less secure and predictable than it was before the war. In fact, that new unpredictability is a major part of the book's story line. Just how well do any of the villagers really know their neighbors? Or their close friends? Or even members of their own families? Well, since this is Agatha Christie, we know we're in for some big surprises and unexpected twists. That's why she's the best-selling novelist of all time.