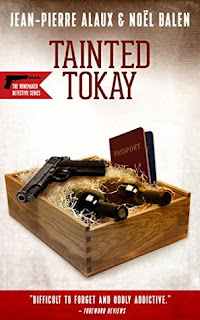 
France’s top wine expert Benjamin Cooker sets off to enjoy the delights of Vienna, a romantic ride down the Danube, a gourmand’s visit to Budapest, and a luxury train through the enchanting Hungarian countryside. All too soon, stolen wallets, disappearing passports, guides who are a bit too obliging, and murder mar the trip. Meanwhile, in Bordeaux, Cooker’s assistant Virgile faces an annoying rival and a mildew crisis in the vineyards just as Cooker’s lab technician is the victim of a mugging.

I think I'm getting hooked on this series. I've read one of the earlier books, Backstabbing in Bojolais, and while I enjoyed that one well enough, I didn't think it was an experience I'd want to continue. Obviously, I was wrong about that because after finishing Tainted Tokay, I'm already looking forward to my next encounter with Benjamin Cooker, his assistant Virgile, and all their friends and enemies.

This one started out a little "iffy" ⎼ the narrative was divided between Cooker and his missus on a vacation cruise on the Danube, and Virgile back in Paris keeping the wine business running smoothly and also dealing with the mysterious attack on fellow employee Alexandrine. I kept waiting for the two story lines to come together, which was a problem at first. But once I abandoned those expectations and just let myself enjoy the read, I had a great time.

The only real criticism I have is that from time to time, Benjamin (and to some extent, all the other characters as well) sounds like he's quoting from a Wikipedia article. He seems to have massive amounts of information on wine (and every other subject, really) stored in his amazing memory banks, and he's only too happy to quote huge chunks of it for us. Have to admit, I skimmed through a bit of that.

But I did manage to pick up a lot of info about wine that was interesting and new to me. In fact, the wine and winemaking are almost like another character in the books ⎼ well, actually the central character; the character that all the action revolves around. It's an intriguing idea and more enjoyable than I would have imagined. But I'd still welcome a little more action and suspense.

(Full Disclosure: I received my copy of this book free of charge from the publisher, in exchange for an honest review. No other compensation was received, and no one attempted to influence my opinion.)

● Qualifies for the following reading challenge: Books In Translation Challenge.