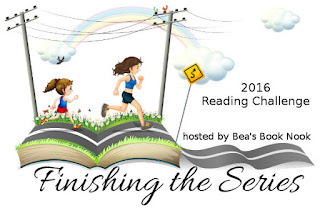 Another challenge I decided to pass up in 2015, and lived to regret it. The Finishing the Series Reading Challenge was originally hosted by Yvonne @ Socrates' Book Reviews, but is now being taken on by Bea @ Bea's Book Nook.

In the coming year, I'm hoping to read more of the books I already own; and I'd really like to finish up at least one or two of the many, many series I have going (many, many, MANY series). So this challenge is perfect for me. Another good thing: reviews, at least short ones, are a requirement -- and I have so much trouble getting reviews posted, maybe that will be the added incentive I need.

I'm being very conservative and signing up at Level 1 (Novice series reader: complete one series), and I'm not going to choose which series right away -- but it will likely be one of these:
During the year, I'll be tracking my progress and keeping my list of books read, over on my challenge blog (HERE).