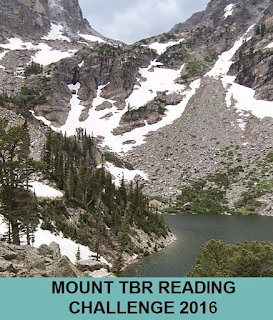 For all the info and guidelines, see the announcement/sign-up post HERE.

I'm still dithering over which reading challenges I want to sign up for in 2016, but I already know I want to do this one. I didn't sign up for the 2015 edition. BIG mistake!

I have literally thousands of books on my various to-be-read shelves/piles/lists. You can take a look at some of them over at GoodReads (HERE), or Library Thing (HERE). In 2016, I really want to reduce the mountain at least a teensy bit and I'm hoping this challenge will help keep me on track.

To start off, I'm signing up at the Pike's Peak Level -- 12 books. But if all goes well, I'll be looking to upgrade as the year goes on. I'm not going to commit to an official list of books I'll read, but I have a fairly long unofficial list of possibilities, some of which might be:
During the year, I'll be tracking my progress, and keeping all my lists over on my challenge blog (HERE).